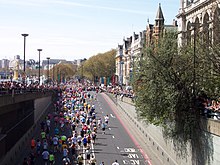 The London Marathon is a marathon in London that is one of the most important in the world in terms of prize money, winning times and number of participants.

The event's founder, former Olympic obstacle course winner and sports journalist Chris Brasher , was inspired by the New York City Marathon . The first run took place on March 29, 1981, with 7747 participants, of which 6255 crossed the finish line. Since then, the event has been held annually in April and has developed into a big sporting festival with more than 30,000 runners and hundreds of thousands of onlookers lining the route.

The marathon has hardly changed since it was first run. The route leads with separate starts for professional runners, wheelchair users and amateur runners from Greenwich Park past the Cutty Sark , over Tower Bridge , through the Docklands and the East End , then back north past the Tower of London , along the Thames to Parliament Square and the Houses of Parliament ( Palace of Westminster ) and on to Buckingham Palace . The finish line used to be on Westminster Bridge and is now in The Mall .

The London Marathon has been one of the World Marathon Majors since 2006, underscoring its importance as one of the world's largest marathon events.

The London Marathon is also a major benefit event with many prominent athletes competing as sponsored runners for charities. Hobby runners also use this opportunity to get a safe starting place in the regularly booked run. Millions of pounds have been raised in this way, for example to help people with Parkinson's disease. Since this is about a good cause and not about athletic top performances, many of these runners are dressed up in bizarre costumes.

On April 19, 2003, ex-professional boxer Michael Watson made headlines when he finished the marathon after six days of arduous biting. He fell into a coma after a fight with Chris Eubank in 1991 and didn't wake up until forty days later. In 1999 the medical prognosis was that he would never be able to walk again. His neurosurgeon and his former opponent Eubank ran at his side.

The 2010 edition was originally won by Lilija Schobuchowa . This victory was later revoked because of doping.

Due to the global COVID-19 pandemic , the 2020 London Marathon was initially postponed to October. In August 2020 it was announced that due to Corona restrictions only professional athletes will compete.

The London Marathon is the fastest in the world when adding up the current course records for women and men - see ranking of the fastest marathon events .