Hamburg Marathon 2008: Leading group at around 14.3 km when leaving the Wallring tunnel; Hamburg Central Station in the background on the left

Finisher medal from the Haspa Marathon 2018 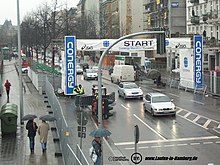 The Hamburg Marathon (officially " Haspa Marathon Hamburg" since July 12, 2010 ) is an important German street and fun run that takes place annually in Hamburg , usually on the last or penultimate Sunday in April .

The circuit, measured according to the guidelines of DLV and AIMS, has been slightly changed a few times since 1986. Until 2008 the goal was in Karolinenstrasse. From 2008 to 2012 the start and finish were moved to Reeperbahn and Heiligengeistfeld. Since 2013, the start and finish have been on Karolinenstrasse. The start, which was previously divided into three blocks in three streets, was also combined in 2008 to form a corridor between the east end of the Reeperbahn and the Millerntordanmm. In 2013, the start for all starters was right at the finish line. The route always led over the Reeperbahn (in 2006 km 1–3 instead of the Simon-von-Utrecht-Straße due to the construction site) to the west, along the Elbe over the Palmaille through Altona back to the city center ( Jungfernstieg , Lombard Bridge ) and circles the Alster in a wide arc over Barmbek , City Nord , Ohlsdorf , Groß Borstel , Eppendorf , Hoheluft-Ost , Harvestehude and Rotherbaum .

Hamburg Marathon 2006: Approx. 17,000 clothes bags are waiting for their owners

The organizer from the first event in 1986 was the Hamburg Athletics Association (HLV). For a few years (until 1996) the hanse-Marathon Hamburg e. V. founded a sponsoring association specifically for the event. At the beginning of 2007 the license rights for the years 2008 to 2012 were sold to Act Agency GmbH, but the contract was terminated prematurely in July 2011. Race director up to and including 2011 was Wolfram Götz. The event has been organized by Marathon Hamburg Veranstaltungs GmbH, a 100% subsidiary of the Hamburg Athletics Association, since 2012.

In 2009 and again for 2013, the IAAF classified the run as a "Gold Label Road Race". Between 1998 and 2005, in addition to the marathon for runners and wheelchair users, there was also an inline skating competition. The Hamburg Marathon is one of the marathons with the most spectators.

Development of the number of finishers

Since 2018, a half marathon has been held parallel to the main race.

After the Berlin Marathon already offered a race for speed skaters in 1997 , the “fast scooters” featured in Hamburg for the first time in 1998. In the first edition there were only 351 participants. In the following year, 1040 skaters started due to the German championship in the marathon. Tristan Loy and Christoph Zschätzsch were able to break away from the field, which is also strong internationally, and in the end Loy won and Zschätzsch became German champion in the marathon. In the women’s category, Anne Titze won.

The race had established itself in the scene and from now on there were always top runners from the USA, France, Denmark and Belgium at the start. In 2001 the winner rode the new type of folding skates, but this technical innovation could not prevail. The superficial treatment of the skaters was also evident: the women usually started from a different starting block than the men, but some of the top runners were wrongly assigned the men's starting block by the organizer. Despite the simultaneous launch these runners benefited from the slipstream of men. When these women then crossed the finish line in front of the actual top group of women, they were disqualified by the organizer.

The skate marathon reached its peak in 2002. In addition to the record number of 2504 skaters, the race was a Grand Prix rating for the World Cup of Inline Skaters, the world's highest-ranking racing series. Furthermore, the European Master Championships, the European championships for seniors, were held this year. The course record fell due to the high level and the high performance density. In the main field of men, 53 runners drove over the time mat within 10 seconds.

In 2005 the race was removed from the schedule of the World Inline Cup (WIC) and the first World Masters, i.e. world championships for seniors, were held. This was also the last skater marathon as part of the Hamburg marathon. The reason given by race director Wolfram Götz was the low number of participants: “After the number of skaters has reduced to around 500, we have now removed them from the program. It didn't pay off anymore. ”The slight decrease in participants was due to the flattening of the inline skater boom, the high entry fee and other events with more interest for speed skaters.

Since 1996, the day before the Hamburg Marathon, a children's and youth marathon has taken place, which covers ten percent of the distance of the marathon for adults (4.2195 km) and is therefore called "The Tenth". The run began and ended in the Glacischaussee. In 2013, the start and finish - as for the marathon - were moved to Karolinenstrasse. Children between the ages of 6 and 17 are eligible to participate.

The number of participants increased year after year and exceeded the 10,000 registration mark for the first time in 2019. Since 2012, “Das Zehntel” has been divided into the runs of primary and secondary school students. The course record has been held by Arne Gabius since 1997, when he was 16 years old and set a winning time of 11:38 minutes. The route record on the female side was set by 17-year-old Mailin Struck in 2013.

Best times of the day