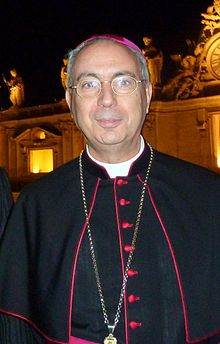 Dominique François Joseph Cardinal Mamberti (born March 7, 1952 in Marrakech , Morocco ) is a French clergyman and cardinal to the Curia .

After studying Catholic theology and philosophy, Mamberti received the sacrament of ordination for the diocese of Ajaccio on September 20, 1981 . On March 1, 1986, he entered the diplomatic service of the Holy See and worked first in the Pontifical Mission in Algeria , later in the Permanent Mission of the Holy See to the UN in New York , in Lebanon and in the Section for Relations the states of the Vatican State Secretariat . On March 21, 1987, Pope John Paul II awarded him the honorary title of Chaplain to His Holiness .

On May 18, 2002 he was appointed Apostolic Nuncio in Sudan and Apostolic Delegate in Somalia and Titular Archbishop of Sagona . He was ordained bishop by Cardinal Secretary of State Angelo Sodano on July 3 of the same year; Co- consecrators were the secretary of the Congregation for the Evangelization of Peoples , Archbishop Robert Sarah , and the Bishop of Ajaccio, André Lacrampe IdP .

Pope Benedict XVI appointed him on September 15, 2006 to succeed Giovanni Lajolo as Secretary for Relations with the States. On August 31, 2013, Pope Francis confirmed him in this post of "Foreign Minister of the Vatican" .

On November 8, 2014, Pope Francis appointed him Cardinal Prefect of the Apostolic Signature . In the consistory of February 14, 2015, Francis accepted him as a cardinal deacon with the title deaconry Santo Spirito in Sassia in the college of cardinals .

On the occasion of a meeting of the Comitato Papa Pacelli , a committee that deals with the work of Pope Pius XII. concerned, Cardinal Mamberti declared at the beginning of March 2017 that “the real face of the Pacelli Pope” was very different from “the one that the 'Black Legend' wanted to spread about him.”

Mamberti is a member of the following dicasteries of the Roman Curia :