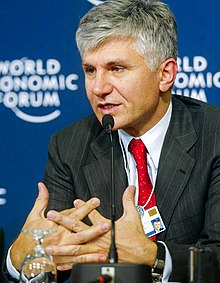 Zoran Đinđić  [ ˈzɔran ˈdʑindʑitɕ ] ( Serbian - Cyrillic Зоран Ђинђић ; born August 1, 1952 in Bosanski Šamac , Yugoslavia ; † March 12, 2003 in Belgrade , Serbia and Montenegro ) was a Serbian politician , philosopher and writer . Đinđić was Serbian Prime Minister (2001-2003) and party leader of the Democratic Party . In 2003 he was murdered. He was married to Ružica Đinđić and had two children.

Đinđić was born in 1952 as the son of an officer in Bosanski Šamac in Bosnia . As a philosophy student at the University of Belgrade , he began his political engagement. Đinđić was sentenced to several months in prison because he and other students from Croatia and Slovenia had founded an opposition student group.

After his release from prison he continued his studies in Germany , in Frankfurt am Main with Jürgen Habermas and in Heidelberg . After moving to the University of Konstanz , he completed his doctoral thesis in philosophy under Albrecht Wellmer in 1979 . It is entitled Marx's Critical Social Theory and the Problem of Justification .

In 1989 Đinđić returned to Yugoslavia to teach at the University in Novi Sad and founded the Democratic Party with other Serbian dissidents . In 1990 he became party chairman and was elected to the Serbian parliament in the same year.

After the local elections in November 1996, which were canceled by the Serbian government, there were massive protests, whereupon the election victory of the opposition was recognized. Đinđić became Belgrade's first non-communist mayor since World War II . After conflicts with his allies about the nationalist Vuk Drašković , he was voted out of office by the Belgrade city council at the end of September 1997.

In the Yugoslav presidential and parliamentary elections in September 2000, he was the campaign leader of the Democratic Opposition of Serbia (DOS) alliance, which consists of 18 parties . After the fall of the Milošević regime, he led the alliance to an overwhelming victory in the elections to the Serbian parliament in December 2000.

In January 2001 he was elected Serbian Prime Minister . As a western-oriented politician, he was in constant conflict with both the old communist forces and the nationalists with whom he worked. He also made enemies through his fight against corruption and organized crime in Serbia as well as the extradition of Slobodan Milošević to the The Hague War Crimes Tribunal in 2002 and the promise made to Carla Del Ponte that Ratko Mladić would be extradited . 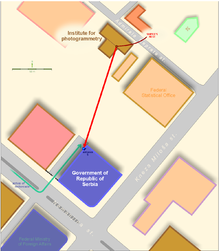 The hiding place of the shooter

On March 12, 2003, Zoran Đinđić was murdered in Belgrade by a sniper who was shot in the stomach and back. The shooter had been lying in wait about 180 meters away at the rear window of a building in order to be able to shoot into the courtyard. Đinđić's bodyguard was also seriously injured. When Đinđić was admitted to the hospital, no pulse could be detected. After his death, which was in Serbia a state of emergency imposed to the executive branch more opportunities to give in pursuit of the perpetrators, which one former in the atmosphere of Milošević faithful and the so-called Zemun - Clan suspected. A total of 7,000 people were arrested, of whom 2,000 were held for long periods.

Zvezdan Jovanović , deputy commander of the " Red Berets ", was arrested as the main perpetrator on March 25 . A little later, the murder weapon was found, a Heckler & Koch G3 rifle , with the aid of which the perpetrator could finally be convicted.

At the end of 2003, the trial against a total of 13 suspects began before a special court in Belgrade. On May 2, 2004, the alleged mastermind, Milorad "Legija" Ulemek , commander of the "Red Berets" turned himself in . He was arrested near his home in a Belgrade suburb. On June 3, 2006, an important witness was found murdered near Belgrade. According to reports from the Serbian media, he had incriminated Slobodan Milošević's son Marko when he testified in camera in 2004 .

Ulemek and Jovanović were sentenced to 40 years' imprisonment on May 22, 2007 for "crimes against the constitutional order". According to the court, Ulemek had the role of coordinator, while Jovanović, who had revoked his original confession during the trial, was the shooter. Ten other defendants, five of whom were on the run, were sentenced to between eight and 35 years' imprisonment. The people behind it remained unknown.

In the appeal proceedings, the Supreme Court in Serbia reduced the sentences for three co-defendants on December 29, 2008, and upheld the verdicts against the main perpetrators in full: u. a. Milorad “Legija” Ulemek (mastermind) and Zvezdan Jovanović (shooter) each for 40 years. Ulemek was a member of the "Tiger" militia led by the notorious militia chief " Arkan ", which committed numerous crimes during the Yugoslav wars . He later led the special police force "Red Berets", which was created under the leadership of the former Yugoslav President Milošević.

Two of the long- running killers, Sretko Kalinić and Milos Simović , were caught in June 2010.

In February 2011, Vladimir Milisavljević, a mastermind behind the murder, was arrested in Valencia, Spain . He had been sentenced to 35 years in prison in absentia.

Zoran Đinđić's grave is in the Belgrade Central Cemetery. Ten years after the murder, a memorial plaque for Đinđić was unveiled at the University of Konstanz.

See also : "Republic of Serbia" in the article History of Serbia

Prime Minister of the Republic of Serbia