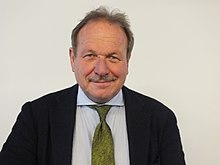 Bsirske is the son of a worker at Volkswagen AG and a nurse. His father was a supporter of the KPD . After completing secondary school (1967), he completed his Abitur at the Theodor-Heuss-Gymnasium in Wolfsburg in 1971 and studied political science at the Otto Suhr Institute of the Free University of Berlin from 1971 to 1978 . From 1978 to 1987 he worked as the education secretary in the Hanover district of the Socialist Youth of Germany - Die Falken . In 1987 he became a member of the parliamentary group of the Green Alternative Citizens' List in the city council of Hanover, 1989 secretary of the district administration of the public services, transport and traffic union (ÖTV) in Hanover. In 1990, Bsirske was promoted to deputy managing director of the ÖTV district administration and in 1991 to the deputy district chairman of the ÖTV district of Lower Saxony . From 1997 to 2000 he was a city councilor and headed the human resources and organization department of the city of Hanover.

There he started some reform projects (such as customer-friendly citizens' offices ), but also ensured the reduction of almost 1,000 jobs among the then 16,000 employees in the state capital. Bsirske has been a member of the board of trustees of the German Family Association since March 2010 . In May 2012 he co-organized the first successful European citizens' initiative “ Water is a human right! ". He is President of UNI-Europa .

In August 2020, Bsirske announced that he would run for the Bundestag in 2021 in the Helmstedt - Wolfsburg constituency .

In November 2000, Frank Bsirske succeeded Herbert Mai as chairman of the public services, transport and traffic union (ÖTV), which in 2001 became part of the United Services Union (Ver.di) with his significant collaboration . Bsirske has been chairman of ver.di since March 20, 2001.

On October 2nd, 2007, Bsirske was elected to the office of ver.di chairman for the third time at the ver.di federal congress in Leipzig with 94.3 percent of the delegate's votes. Bsirske is an employee representative on the supervisory board of Deutsche Bank AG , the energy group RWE AG , Lufthansa AG and Postbank . At Lufthansa he was not exonerated as a member of the supervisory board in 2003 after a strike call. The strike is said to have cost the company several million euros. Bsirske is also a member of the board of directors of the Kreditanstalt für Wiederaufbau (KfW).

"What the workers need now is a rescue package for their wallets."

According to an article in the Frankfurter Rundschau on August 5, 2008, Bsirske had disclosed his income a long time ago. According to his spokesman, he earned 175,000 euros a year at the time. According to his spokesman, he kept 50,900 euros of his remuneration as a member of the supervisory board at Lufthansa and RWE totaling 427,000 euros per year. However, this statement contradicts the resolution of the DGB Federal Committee of October 10, 2000 on the transfer obligations of employee representatives who were elected to a supervisory board as members of a DGB trade union. This resolution allows ordinary members of the supervisory board a maximum retention of 4600 euros and deputy supervisory board members a maximum retention of 6900 euros. The excess amounts are to be paid to the Hans Böckler Foundation or other union-related institutions. In the aforementioned article in the Frankfurter Rundschau, it is also mentioned that Bsirske pays the royalties for his third supervisory board mandate in full. This means that it complies with Section 10 No. 2 of the ver.di Articles of Association, according to which all ver.di full-time employees are obliged to pay in full the remuneration received from the third supervisory board mandate.

In the summer of 2008, Bsirske was publicly criticized for taking a private first-class flight with Lufthansa to Los Angeles while the airline was on strike at the same time by ver.di. As a member of the Lufthansa Supervisory Board, he was granted such free flights. After heavy criticism from the media, from politicians of the Union parties and FDP, as well as from the union camp itself, Bsirske agreed to pay the airfare himself.

President of the Public Services, Transportation and Traffic Union