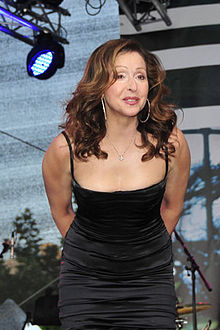 Vicky Leandros ( Greek Βίκυ Λέανδρος * 23. August 1952 in Paleokastritsa on Corfu ; native Βασιλική Παπαθανασίου Vassiliki Papathanasiou , civic since 1986 Baroness von Ruffin ) is a singer from Greece with German and Greek citizenship, which sold over 55 million records worldwide. Her best-known titles include Theo, we're going to Lodz and I love life .

With the support of her father Leandros Papathanasiou, who was already successful in Greece and Germany as Leo Leandros , she also made a career in both countries. Vicky Leandros got a singing, ballet and guitar training. In 1958 the singer came to Germany and was henceforth called Vicky . The family spent years together in Hamburg until father Leo divorced his wife Kyriaki Protapapa in 1961. Vicky grew up with her father in Hamburg and attended high school on the Wartenau.

Her first single, Messer, Gabel, Schere, Licht (1965), was a success in Germany. In 1967 she took part in the Grand Prix de la Chanson (Eurovision Song Contest) in Vienna for Luxembourg ( Télé Luxembourg ) and reached fourth place with the title L'amour est bleu . The song became an international success and evergreen , especially in the instrumental version by Paul Mauriat . In the same year she also took part in the French preliminary decision with the song Les Amoureux , but did not win and was therefore able to start for Luxembourg. After several hits in Europe and overseas took in 1972 for the second time for Luxembourg, Grand Prix in part, this time in Edinburgh , and reached that of Klaus Munro composed and Leo Leandros Title Après toi (dt. Then you came ) not only the first Place but also a huge commercial success. The single in several languages ​​( Come What May ) sold over 5.5 million copies worldwide. Her biggest hit in Germany was the popular song Theo, we are driving to Lodz in 1974 many weeks remained at No. 1 on the German sales charts and earned Leandros in German-speaking countries the image of the popular singer what her artistic versatility in international Chanson success was not fair . In August 1975 she released I love life, another hit on her eleventh studio album of the same name, which was very successful. The song reached number 10 and stayed in the charts for a total of 19 weeks.

From the late 1960s to the mid 1980s in particular, Vicky Leandros recorded most of her singles not only in German, but also in Greek, English, French, Dutch, Japanese and Spanish. With this concept she had great chart successes a. a. in France, Belgium, Canada, the Netherlands, Spain, Latin America and Japan. She appeared in numerous music shows on television and was rewarded with countless awards for her success. In 1998 she had a great success with Because my heart never forgets you again, the German recording of the theme music (My Heart Will Go On) for the film Titanic . With 20 top 20 hits in the German single charts, she is not only the most successful national artist, but is also one of the most successful female artists in the German-speaking region since the charts were introduced, compared to the international competition.

In 2000 Leandros produced a first album with his own compositions under the title Jetzt . In 2003, an album with songs by Mikis Theodorakis followed . On March 9, 2006, she took part in the German qualifying for the Eurovision Song Contest 2006 with the song Don't Break My Heart , but lost to Texas Lightning .

Vicky Leandros has a son (Leandraki) from her first marriage. With her second husband Enno Freiherr von Ruffin, she has two other children (Milana and Sandra von Ruffin) and bears the real name of Vicky Freifrau von Ruffin. Until she separated from Ruffin in 2005, she lived mainly on Gut Basthorst in southern Schleswig-Holstein. Vicky Leandros has been living in Hamburg again since 2012. Her youngest daughter, Sandra von Ruffin , works as an actress. Leandros became a grandmother for the first time in October 2013. Their eldest daughter Milana gave birth to a boy.

In 2006 she received an offer from Friedbert Pflüger , the top candidate of the CDU for the election to the Berlin House of Representatives in 2006 , to work as a cultural senator in his shadow cabinet . But she refused on the grounds that she wanted to continue her tour. In 2001 she was already in discussion as the Senator for Culture for Hamburg.

In the parliamentary elections in Greece in 2007 , she ran for the social democratic PASOK , but won no mandate. As early as October 2006 she ran for PASOK in the local elections in Piraeus and won a mandate. She became Vice Mayor and City Councilor for Culture and International Relations. On May 28, 2008, she announced that she was stepping down from office.

Performers of the winning entries of the Eurovision Song Contest

Luxembourg at the Eurovision Song Contest