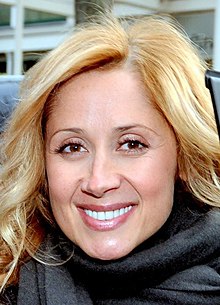 Lara Fabian (* 9. January 1970 in Etterbeek as Lara Crokaert ) is a Belgian - Canadian singer and songwriter in 1988 for Luxembourg at the Grand Prix Euro Vision participated. While the singer is based in the French-speaking world in the field of chanson , she has so far released three English albums internationally, which oscillate between pop and adult contemporary . So far it has sold over 20 million records.

Fabian made his first appearance in front of an international audience in 1988 at the Grand Prix Eurovision in Dublin . She competed for Luxembourg and her Croire title reached fourth place.

Since 1997 Fabian has been one of the great singing stars in France , Canada and Belgium. Tout, Je t'aime (1997), Si tu m'aimes (1998), La difference (1999), Adagio (2000) and Immortelle (2002) were all in the top ten of the French charts. She also hit the mark with two duet recordings: Requiem pour un fou (1999, with Johnny Hallyday ) and Tu es mon autre (2002, with Maurane ). In Germany and the USA she has had an adequate hit so far: I Will Love Again from the first English-language album Lara Fabian (2000). In terms of marketing, she benefited from the fact that Celine Dion had announced a long break in 1999. The record company and several media spoke of the "new Celine Dion".

In 2001 she sang the theme song for the animated film Final Fantasy: The Powers in You The Dream Within and the theme song for the Steven Spielberg film AI, Artificial Intelligence . For always is available in a solo version and a duet version with Josh Groban. The second CD with English titles, A Wonderful Life, was successful in the francophone world in 2004. In 2005 another album called 9 was released .

In 2007 Fabian was a guest at the Sanremo Festival , where she sang in a duet with Italian colleague Gigi D'Alessio . Then the joint single Un cuore malato was released, with the French version Un cœur blessé in the French top 20. With her CD Le secret , released in spring 2013, she made it back to the top of the French album charts.

Fabian has been a Canadian citizen since 1996 and lives mainly in Brussels and Montréal . She was in a relationship with the French director Gérard Pullicino and has their daughter Lou, who was born on November 20, 2007. Since June 2013 she has been married to the Italian magician Gabriel di Giorgio.

In 2015 she took part in the Festival di Sanremo with the Italian-language title Voce (Eng: "the voice") . In the main competition she reached 20th and last place.

In 2017 their third English-language album was released with Camouflage .

Luxembourg at the Eurovision Song Contest