He is considered the " Nestor of nature conservation in East Germany " and in 1950 designed the logo of a black long-eared owl , which has been legally valid there since 1954 and which in the German Democratic Republic (GDR) stood as a symbol for nature and landscape protection areas as well as for protected parks, woody plants and natural monuments . In its most popular form to this day, the owl stands on a yellow, pentagonal shield that ends at an acute angle. This version with a graphically revised owl became legally valid in the GDR on June 1, 1971.

Kretschmann attended elementary school in Berlin and, after completing an apprenticeship as a tailor, worked as a tailor in a Berlin company. When the company switched its production to uniforms in 1933, the convinced pacifist quit and moved with a friend into a garden house in Rüdnitz near Bernau .

Through intensive fasting, he managed to evade military service in 1935 . He was drafted in 1936, but released after five months because he was considered "dangerous to the spirit of the troops". He then went on a journey of 12,000 kilometers through Germany, Switzerland and Northern Italy .

In 1941 he was drafted into forced labor and after interrogation by the Gestapo in 1942 he was sent to the front in the Soviet Union as a medic in the Wehrmacht .

In 1944 he was sentenced to death. An injury prevented the execution of the sentence and he deserted during a home leave in 1945. He hid in a several months gazebo , which he had provided with a hole in the ground to hide.

The GDR sign with Kretschmann's older owl symbol, which was prescribed until 1971 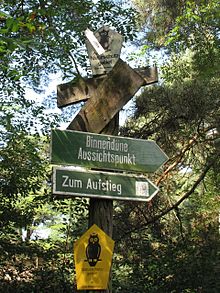 Above the heavily faded GDR version of the nature protection shield, which became legally valid in 1971, and below the new version on the inland dune Waltersberge

In 1946 he joined the Communist Party of Germany and remained a member of the successor parties SED in the GDR and the PDS after reunification until his death .

The owl symbol developed in Lower Saxony in 1996 in the green triangular sign that has been in effect in West Germany since 1954.

The symbol of the long-eared owl, which stands for nature conservation, was officially introduced with the first nature conservation law of the German Democratic Republic on August 4, 1954, and the manner in which it is displayed was regulated by law. Unofficially, Kretschmann had already set up around 5000 signs with his owl symbol from 1950 onwards. Kretschmann had chosen the owl in order to counteract the then widespread superstitious term "bird of the dead". In addition, the symbol should indicate that the animal is particularly worthy of protection. Despite the legal requirements in the GDR, which only allowed Kretschmann's symbol, there were also deviating owl representations in designated nature conservation areas. As part of the reunification , the decision of the 42nd Environment Ministers' Conference of 18./19. May 1994 to continue using the owl symbol on the territory of the former GDR. It was also suggested that the symbol of the long-eared owl be used throughout Germany. This suggestion was taken up by some West German federal states, whereby it remained a state matter how a future owl logo should be designed. In West Germany, the sea ​​eagle in a green triangular sign has been a symbol since 1954 . The sea eagle was adopted as the symbol of the German heraldic bird . Since the development of a corresponding logo is a matter for the country, different variations of the symbol were used.

Kretschmann initiated the "Working Group for the Protection of Species Endangered". In 1976 he founded the “ White Stork ” working group . In Rathsdorf he saved a 200-year-old kiln , the Altgaul stork tower , on the top of which pairs of storks have nested since time immemorial, and set up a white stork exhibition here in 1978.

In 1942 he had married Erna Scherff (born November 12, 1912 in Bollinken near Stettin ; † January 6, 2001 in Bad Freienwalde). In the same year a son was born who died in 1945. Erna later became an inspirer and “good spirit in the background”. From 1960 she was the breadwinner of the family and wrote and edited all of his publications. In 1945/46 Kretschmann built a log cabin for the family on the garden area in Bad Freienwalde, where he once hid for 75 days as a deserter supported by his wife. He had planned a basement under the house, which he kept secret. This room was constructed in such a way that there was only access via floor boards from the terrace. In 1960 he expanded this house into the “House of Nature Care”, which was open to everyone interested in nature conservation, natural horticulture and a vegetarian lifestyle . In 1984 it was handed over to the public sector and is still available today as a museum and hay hotel .

The fact that Kurt Kretschmann was a pacifist, military service opponent and deserter , who was given an anarchist attitude, was not particularly valued in GDR times. Today there is greater interest in this side of his personality in the Anklam Peace Initiative / Anti- War Museum.

Kretschmann has been honorary president of the German Nature Conservation Union since 1991 . In 1993 he and his wife received the European Environment Prize . On March 2nd, 1999, his 85th birthday, he and his wife became an honorary citizen of Bad Freienwalde. He lived there until his death, took part in public life, maintained many contacts and also wrote poetry.

Since March 2, 2009, the secondary school in Bad Freienwalde has been called Erna-und-Kurt-Kretschmann-Schule .