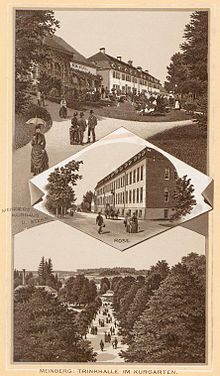 Meinberg is first mentioned in 978. The Meierhof, which was only demolished in 1960, is listed under the name "curia meginbergen" this year. Meinberg was mentioned as a spa in 1676, when Andreas von Keil (called "Cunaeus") recommended the Meinberger Gesundbrunnen. In 1762 Johann Erhard Trampel (1737-1817) was commissioned by Count Simon August to examine the sources in Meinberg and to prepare an expert report. Trample is considered to be the driving force behind the development of the farming village into a spa. In 1767 Meinberg was officially named a "Curort" by a decree of the Count; this year 413 spa guests were counted. Hotels had to be built to accommodate the guests. The historic spa park was laid out in 1770. In the same year the lodging house "Stern" was built, then private property of Trampel, in 1775 the lodging house "Rose" was built on the opposite side of the baroque spa garden. In the 1840s there was a Pharo casino in the village, which was mostly only open on Sundays during the short term. The table position was limited to 500 Reichstaler, the maximum stake was 5 Taler.

Trample died in Pyrmont in 1817 at the age of 80 . The successors of Trampel, Scherf († 1818) and then Gellhaus lay the foundations for the mud bath cure (today: Moorkur), which later proved to be a success. Nevertheless, it was not until 1900 that 1,000 spa guests were counted for the first time in one season.

After more than 800 years of history, Lippe's independence ended in 1947 and it became part of the newly founded state of North Rhine-Westphalia . As a result of the existing conditions in Lippe, however, the domain and forest assets, which also included the Meinberg and Salzuflen baths, were not transferred to North Rhine-Westphalia. The Lippe Regional Association was established by law of November 5, 1948 to manage these assets and has been the sponsor of the state spa ever since.

As a result of the increasing number of spa guests, there was brisk construction activity in the 1950s, and the Vielländerpark, called Silvatikum, was created. This enlarged the entire spa park area in Bad Meinberg to over 40 hectares. The 1970s and 1980s saw a second construction boom, in which three large health clinics were built on the edge of the Silvatikum and the thermal baths. In 1992, the number of spa guests reached its highest level at almost 38,000. Since then, the numbers have fallen sharply due to the structural reform in the healthcare system, and at the end of the 1990s the three spa clinics at Silvatikum gradually closed. Europe's largest yoga seminar house Yoga Vidya has been located there since the end of 2003 .

On January 1, 1970, Bad Meinberg was incorporated into the new town of Bad Meinberg-Horn . This was renamed Horn-Bad Meinberg on September 10, 1970 .

The Evangelical Church of Bad Meinberg was built in the 12th century in the Romanesque style. The Reformation was introduced in 1541.