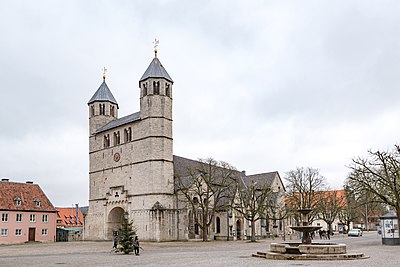 The monastery was founded in 852 by Liudolf . The construction of the stone building, consecrated by Wigbert von Hildesheim in 881 , began in 856. The former westwork was consecrated in 927 . The west tower and the west transverse structure were aligned with the aisles. Parts of the Carolingian masonry may still be preserved in the east and west. The church was supposed to be consecrated in the year 1000, because of a fire after which the building remained largely usable, it was only consecrated in 1007. This is evidenced by numerous visits by the emperor and by synods that took place in Gandersheim during this time. It is believed that the protruding arms of the westwork were also built during this period. The usual abode of the clergy was the choir , the members of the secular power, especially the emperors, stayed in the westwork. After damage from a second fire, it was necessary to convert the western transept; at the same time the so-called Miss Choir was established. Abbess Adelheid II (1063-1094) was a sister of Emperor Heinrich IV. During her tenure, the central nave was rebuilt and a crypt was laid out. After a third fire, it was consecrated between 1162 and 1168. During this time, the eastern parts of the building and the side aisles were vaulted and the central nave was raised. In the 14th and 15th centuries, chapels were added to the south and north walls. The east apse was renewed in 1703. The renovations since 1938 led to the demolition of Paradise on the west side, the capitals were falsified and gables were invented on the western transept . The last major renovation took place from 1992 to 1997. Among other things, the rood screen was removed. In addition, the Bartholomew Altar has been relocated and placed in the neighboring Brunshausen Museum.

The front building with two octagonal west towers looks like a shield wall . The basilica is adjoined by three naves with a western and an eastern transept . The apse on the east side was rebuilt in 1703, according to a name. The originally elliptical windows were replaced by those in the Romanesque style in the 19th century . The masonry of St. Stephen's Chapel and that of the southern choir chapel form a unit with the southern wall of the eastern transept, which probably still consists of the original pre-Ottonian masonry of the minster. The John the Baptist Chapel and the Bartholomew Chapel were added around 1350 in front of the south aisle. A tympanum depicting Jesus between the apostles Peter and Paul was walled in above the late Gothic portal of the Peter and Paul Chapel from 1439 . It comes from the former Romanesque portal of the side aisle. In the years after 1100, the ashlar masonry was placed in front of the walls of the western transept, which was probably from the Ottonian period. It has no relation to the inner storey height, but to the walls of the aisle and the tower substructure. The north aisle wall was also faced; in front of it are the Antonius chapel from 1462 and the Andreas chapel from 1432. The west building with the two octagonal towers was probably created during the facing instead of the west work with three towers.

Arcades with two Saxon and one Rhenish column alternation separate the side aisles from the central nave. The capitals are adorned with various types of leaf ornaments. The wall closing off the central nave is supported by three pillar arcades. On the upper floor, the wall is divided by three arched windows, the two outer windows of which are designed as biforic windows . The dome of the apse is adorned with a painted starry sky. The cannon choir is on the north side; Duke Liudolf's burial place can be found in the south . The vaulted basement of the westwork is accessed through a heavy bronze door. The door with angel motifs was manufactured in 1969 by Ursula Wallner-Querner. The raised central part of the westwork is as wide as the central nave, which is accompanied by an almost square hall on the north and south sides. There is a four-pass central column in each of the two halls. This widest part of the church building was originally also the highest; a chapel with a throne was housed under a mighty tower on the upper floor. The tower with the throne chapel lost its importance after the investiture dispute and was demolished in the 12th century. The famous Roswitha window can be seen in the Antonius Chapel, and the sarcophagus of Abbess Elisabeth Ernestine Antonie is in the Andreas Chapel. Both chapels were built in the 14th and 15th centuries in the Gothic style.

Relics of Popes Anastasius I and Innocent I.

In the crypt there are also the relics of two Roman Catholic popes. These are Anastasius I and Innocent I , who were popes around the year 400.

Many of the original works have not been preserved on site. Much has been moved to museums, for example to the Veste Coburg , the Herzog Anton Ulrich Museum in Braunschweig or the Museum Brunshausen (Bartholomäus altar). However, important works of the Gothic and Baroque periods are still on site. There are also works from the 20th century (window, baptismal font, bronze door).

The organ of the collegiate church was built from 1998 to 2000 by the organ building company Manufacture d'Orgues Muhleisen (Eschau, France). The abrasive loading -instrument has 50 registers on three Manual works and pedal including 7  transmissions (Nos. 44-50) and an extension (no. 42) in the pedal. The game contractures are mechanically, the Registertrakturen and coupling are selectively mechanically and electrically to actuate (double registration).

The chimes of the collegiate church include eight bells. The bell hangs in the bell house between the two towers. The oldest bell with the name "Nikolaus" dates from 1513, the second oldest from the Baroque. The other bells were purchased after the Second World War.