The Osterwald is a mountain range (up to 420  m above sea  level ) of the Calenberger Bergland and, together with the Nesselberg and the Kleiner Deister, forms a closed group of three adjoining mountain ranges in the Leinebergland . It is located between Coppenbrügge , Elze and Eldagsen in the districts of Hameln-Pyrmont and Hildesheim in Lower Saxony and in the Hanover region .

The Osterwald is located in the Calenberger Bergland in the north of the Leinebergland, which borders the Calenberger Land there . It is located about halfway straight line between Hamelin in the west and Hildesheim in the east and between the towns of Coppenbrügge in the southwest and Eldagsen the north and Elze in the east. Parts of the Weserbergland Schaumburg-Hameln nature park are located on larger western and southern parts of the ridge .

At the southern edge of the Osterwald lies the village of Osterwald , a district of Salzhemmendorf . The ridge extends southeast of the valley of Gehlenbach and Gelbbach, in which the state road  422 runs from Coppenbrügge in the southwest and Eldagsen. Immediately north-north-west of this valley is the Nesselberg . Beyond or south of Coppenbrügge is the Ith .

At the Dreieckigen Stein (approx. 375  m ), near the Sennhütte forest restaurant in the Osterwald, the borders of the districts of Hildesheim and Hameln-Pyrmont and the Hanover region meet.

The mountains and elevations of the Osterwald include - with heights in meters (m) above sea level (unless otherwise stated):

Numerous streams arise in the Osterwald, the water of which flows through the Haller and Saale rivers into the Leine . The only exception is a stream that rises west of the Fast and flows through the Gelbbach and Hamel into the Weser . The sea ​​puddles are one of the lakes in the ridge .

Localities, districts, goods and forest houses on or near the Osterwald are (viewed clockwise ): 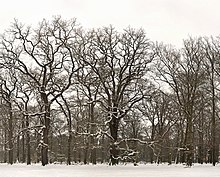 The Lower Saxony State Forests (NLF) have been carrying out the "Gelbbach" project in Saupark Springe between Coppenbrügge and Eldagsen since 2014 . A hat forest will be created on an area of ​​around 20 hectares , which has been tended by grazing with a herd of Highland Cattles since 2015 . The project is conceived as an eco-account ; because it serves as a substitute for the impairment of the natural balance elsewhere through the construction of roads and facilities.

To this end, the Saupark Forestry Office will remove the spruce forest and replace it with natural mixed oak forests and swamp and quarry forests. The drainage ditches are closed. At the same time, small bodies of water are created for amphibians , insects and birds such as the black stork . Mountain newts , fire salamanders and common toads are also said to settle here. Typical types of near-natural swamp and bog forests such as oaks and alders are planted in certain areas .

In 2016, fifty single oaks were planted on a third of the area at larger intervals, which will grow into mighty trees with large crowns and shape the appearance of the future Hutewald. Some relics of the former Hutewald, which is now being replanted, still stand on the Gelbbach today.

The Wülfinghausen Monastery, founded in the 12th century, is located on the east side of the Osterwald behind the spacious former monastery property . The current structure of the monastery dates from the beginning of the 18th century due to several fires. Since 1994 it has been inhabited by seven sisters from an evangelical community.

Mountain spur with remains of Barenburg , the monastery Wülfinghausen seen from

1 km west of the monastery Wülfinghausen is on a spur-shaped spur of the Easter forest the Barenburg , a Wallburg plant of 5.5 ha inside. The facility is in a strategically favorable location, as two sides are naturally secured by steep rock faces and slopes. In the south, an approximately 300 m long stone wall with a rampart and a ditch in front served as protection. Since no excavations have been carried out so far and no finds are known, the construction time of the facility is assumed to be in the pre-Roman Iron Age . It could have been used as a refuge until the Middle Ages , as it was part of the monastery property.

In the Osterwald Osterwald sandstone , limestone and hard coal were mined until the middle of the 20th century . Hard coal mining can look back on more than 400 years of tradition. The first coal mining was carried out in 1585 on behalf of Duke Julius of Braunschweig . The Osterwald Hüttenstollen is now a visitor mine and museum .