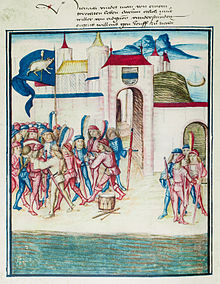 After returning from the battle of Nancy, the brothers from the foolish life gather in Zug under the blue banner with the piston and sow, 1477. Illustration from the Bern Chronicle

The Saubannerzug , also known as the piston banner procession or the procession of goal-real life, was the military undertaking of a freelance group that set off from central Switzerland in the direction of western Switzerland and Geneva during the carnival season in 1477 . The aim of the Saubannerzuges was he of Geneva, which at that time the dominion of the House of Savoy , which belonged to the Burgundian Wars promised but not yet paid fire treasure sum collect.

Uri and Schwyz warriors ( Reisläufer ), who were dissatisfied with the distribution of booty after the victory of the Confederates in the Battle of Nancy, gathered in the company of real life . Participants from other Swiss locations joined the Saubanner procession. Its strength is estimated at 1700 men. The banner of the procession showed a wild boar ("sows") and a mace on a blue background .

On their march, the Saubanner movers took a threatening stance against cities that belonged to the Swiss Confederation. The Berner Chronik states, "that those who live in the goal of a goal with a paner what a butt and also a boar molet, with great sacrilege and willfulness against Burgdorf " . The army caused the councilors of the cities of Bern, Zurich and Lucerne a great headache as they were in negotiations with Savoy and France. Geneva had to undertake to immediately pay the Confederates a third of the 24,000 guilders still owed ; the remaining two-thirds were held hostage. In addition, Geneva had to pay each train participant two guilders as compensation and offer a drink. These concessions enabled the train to be stopped on March 4th before reaching its destination.

Gottfried Keller lets the hero of his novella Dietegen take part in the march of real life. The original Saubanner is now in the museum of Zug Castle .

Today the word Saubannerzug is often used in the Swiss press to characterize vandalistic excesses. But also on Zurich's Sechseläuten people speak of Saubanner trains in guild circles; This means informal (not organized by the Central Committee of the Zurich Guilds) visits by the young guilds to another guild.