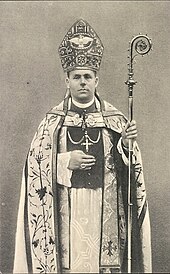 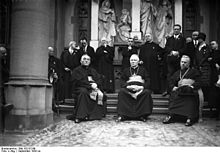 Joannes Baptista Sproll (* October 2, 1870 in Schweinhausen ; † March 4, 1949 in Rottenburg am Neckar ) (there is also the spelling Johannes Baptista Sproll), was the seventh Roman Catholic bishop of the Diocese of Rottenburg-Stuttgart and a declared opponent of the National Socialist Regime. His motto : Fortiter in fide (strong in faith).

Joannes Baptista Sproll came from a humble background and was born as the son of the road warden Josef Sproll and his wife Anna Maria geb. Born freer. Sproll attended the Latin school in Biberach and the high school in Ehingen . From 1890 to 1894 he studied Catholic theology at the Eberhard Karls University of Tübingen . He was ordained a priest on July 16, 1895 . In 1898 he was awarded a doctorate with a thesis on the legal and constitutional history of the St. Georgen Foundation in Tübingen. phil. PhD . Sproll was a member of the Catholic student association KStV Alamannia Tübingen in the KV .

In 1909 Sproll became a pastor in Kirchen in the Oberamt Ehingen . In 1912 he was elevated to the status of cathedral capitular , which was associated with a mandate in the chamber of the landlords of the Württemberg state parliament . In 1913 Sproll was appointed vicar general and in 1915 auxiliary bishop of the Rottenburg diocese and titular bishop of Thebae Phthiotides . The episcopal ordination received his Bishop Paul Wilhelm Keppler on June 18, 1916 Co- consecrators were the Mainz bishop Georg Heinrich Maria Kirstein and the Brixen auxiliary bishop Sigismund Waitz .

From 1919 to 1920 he was a member of the Constituent Assembly of the Free People's State of Württemberg for the German Center Party . From 1913 to 1928, Sproll, who was interested in history, was chairman of the traditional Sülchgauer Altertumsverein e. V. in Rottenburg.

Sproll also became known for his rejection of women's sport, which he did not advocate for reasons of "impropriety".

When the long-time bishop of Rottenburg Paul Wilhelm von Keppler died in June 1926, it was initially unclear how the new bishop would be determined. In previous episcopal elections, the cathedral chapter had the right to propose the office of bishop, but the king of Württemberg had the sole right of appointment. After the fall of the monarchy in 1918, the church regiment of the Württemberg crown fell away, so that the cathedral chapter was initially of the opinion that it could freely elect the bishop. The incumbent nuncio of the Catholic Church in Germany Pacelli , who later became Pope Pius XII, opposed the canon law that had been in force since 1917, according to which only the Pope had the right to appoint bishops. It was finally agreed that the Holy See should propose three candidates from which the cathedral chapter would then choose the future bishop.

The Holy See finally proposed Joannes Baptista Sproll, the Breslau professor Ludwig Baur and the director of the Tübingen Wilhelms-Stift Georg Stauber for election . Sproll was elected the new Rottenburg bishop with six out of seven votes; his enthronement was scheduled for April 1927.

However, after a request was made in Rome for confirmation of the election and the execution of the appointment bull, an intrigue set in motion: The Tübingen moral theologian and Professor Otto Schilling , who would have liked to talk himself up for the office of bishop and for whom the proposed candidates were too liberal wrote a denunciation letter to Pacelli, in which he denounced all his colleagues in Tübingen, but not least accused Sproll of being the father of an illegitimate child. Pacelli instructed the bishop candidate Stauber to clarify the situation instead of speaking to Sproll himself. He found out that it was an attempt at revenge by two teachers who were subordinate to Sproll at Ehingen and which lacked any true basis.

While the facts were being clarified, Rome had in the meantime let the planned enthronement date for Sproll pass, so that he could only be installed as the new bishop of the Rottenburg diocese and take over his official duties on June 14, 1927.

Resistance to the Nazi dictatorship

Sproll recognized early on that “ National Socialism is incompatible with Christianity” and preached against the National Socialists. During the Nazi era , the bishop publicly took a stand against the terrorist regime, his abstention from the referendum on the annexation of Austria on April 10, 1938 led to an investigation and to demonstrations against him staged by the Nazi rulers. On July 23, 1938, Sproll was expelled from his diocese, to which he could not return until 1945. During this time he lived in Krumbad , a district of the city of Krumbach (Swabia), today the district of Günzburg in the diocese of Augsburg . It was precisely the separation of Sproll from his diocese, the refusal to resign to the then nuncio in Germany, Cesare Orsenigo , and his early and unshakable counter-position to Nazi arbitrariness earned him the popular title of “ martyr- bishop” (derived from the ancient Greek word martyria for Certificate ) a. As early as July 5, 1934, Sproll held a sermon in the course of the Bishops' Conference in Fulda, which, according to Franz X. Schmid, et al. a. The following was used as a template for the Faulhaber draft for the encyclical With Burning Concern :

“ Boniface holds the cross in one hand and the book of the Gospels in the other. That is the symbol of an apostle profession, the symbol of a golden loyalty. […] In addition, however, many people raise their ax to smash the church […], to smash the cross he erected in German lands, to tear the image of the crucified from the hearts of the Germanic people. [...] But Christianity will have to endure severe storms against this alleged 'religion of blood and race'. You should fearlessly hold fast to the sacred inheritance that you inherited from your parents. "Stand firm in your faith!" Warns the apostle. "

On the occasion of a men’s pilgrimage on September 19, 1939, Sproll commented positively on Jews and their religion, as can be seen from a note in his files, but negatively on the Reichspogromnacht . On August 1, 1940, Archbishop Conrad Gröber from Freiburg and Vicar General of the Diocese of Rottenburg Max Kottmann protested on behalf of Sproll about the euthanasia program (the murders) in the Nazi killing center in Grafeneck , one year before the public protest by the Bishop of Munster Clemens August Graf von Galen . Sproll, on the other hand, found similar words about the war as many of his colleagues in office. He wrote: “Already, following the call of the Führer , men capable of armed weapons from all our communities have rushed to the borders to protect their homes and hearth. [...] God be with all who have undertaken the hard work of war and give them courage and strength to fight victoriously for the dear fatherland or to die courageously. "

On April 19, 2006, Bishop Gebhard Fürst deposited memory of Bishop Joannes Baptista Sproll and the Württemberg State President Eugen Bolz in the Roman church of San Bartolomeo all'Isola (which is dedicated to the memory of the martyrs of the 20th century) . At the inauguration of the newly designed Eugen-Bolz-Platz in Rottenburg am Neckar on October 7, 2007, Bishop Fürst declared: “A beatification procedure for Bishop Joannes Baptista Sproll has been in preparation for a long time”. On January 20, 2011, the Bishop Sproll working group was constituted . Due to the efforts of this group, the beatification process for Bishop Sproll was officially opened on May 9, 2011 with a solemn service in the Sülchenkirche near Rottenburg am Neckar. The person Sproll can now be worshiped.

The Bischof-Sproll-Bildungszentrum in Biberach-Rißegg, which is located near his place of birth, was named after Joannes Baptista Sproll.

Bishops of Rottenburg-Stuttgart (since 1821)