Friedrich Wieck around 1830, painting in the Robert Schumann House in Zwickau

Johann Gottlob Friedrich Wieck (born August 18, 1785 in Pretzsch ; † October 6, 1873 in Loschwitz ) was a German musician , music critic and music teacher . He was the father of the musician and composer Clara Schumann .

Friedrich Wieck's passion for music developed almost without any support from his parents. As a high school student at the Thomas School in Leipzig , he took piano lessons without his parents' knowledge, but studied theology at their request .

In 1828 Wieck married Clementine Fechner, who was twenty years his junior, the sister of Eduard Clemens and Gustav Theodor Fechner . In 1832 the daughter Marie emerged from this marriage , who later became a pianist, as well as Cäcilie (1834-1893), who fell ill at an early age, but before that as a talented young pianist. In his writings Wieck spoke appreciatively of his "three daughters"; meant Clara, Marie and Cäcilie. His first wife Mariane later moved to Berlin and married the music teacher Adolph Bargiel (1783–1841). One child of this marriage was the composer Woldemar Bargiel . 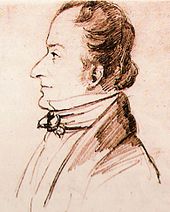 Friedrich Wieck around 1838, drawing by the singer Pauline Viardot-Garcia

After completing his theology studies, Wieck initially worked as a private tutor. From 1818 to 1835 he was the owner of a piano factory and a music lending institute in Leipzig. In this position he traveled several times to Vienna to see his business partner Matthäus Andreas Stein there . On one of these trips he visited Ludwig van Beethoven in July 1823 in his summer quarters in Hetzendorf . The detailed conversation between the two has come down to us in Beethoven's conversation books and in a letter from Wieck. 1828 bought Wieck a fortepiano of stone for his daughter Clara. Today he is in the Robert-Schumann-Haus in Zwickau and was shown together with Clara Schumann on the back of the 100 DM note.

Wieck is considered one of the most important music educators of the early 19th century in the German-speaking world. The most successful student was his daughter Clara . He trained her, organized for her concert tours through Europe, which at the time were often difficult to manage, and helped her to gain early fame through his activities. Clara's half-sister Marie was also trained to be a successful pianist by her father.

Other pupils of Wieck were Hans von Bülow and the composer Robert Schumann , whom Clara later married against her father's will in 1840. Schumann had to fight for the marriage license before the court. This in turn led to the break in the friendly relations between the two, which, despite Wieck's efforts to achieve reconciliation, never returned.

Wieck was also active as an essayist and book author and was probably the first (1853) to use the expression " Zukunftsmusik " in German ; inadvertently, Ludwig Bischoff is often referred to as the author in the literature . 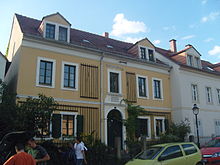 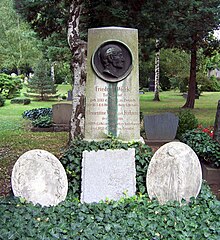 In 1840 Wieck moved to Dresden with his wife Clementine and their daughter Marie. Most recently he lived in Loschwitz. In December 1844 he met with the piano teacher and composer Karl Kuchten and other people to organize a chamber music series .

Friedrich Wieck was buried in the Trinity Cemetery in Dresden in the Johannstadt district.

In 1983 Peter Schamoni made a film entitled Spring Symphony about the intricate relationship between Friedrich Wieck and his daughter Clara in connection with the marriage of Clara and Robert Schumann. Rolf Hoppe played the role of Friedrich Wieck.