The title of this article is ambiguous. Further meanings are listed under Telegram (disambiguation) . 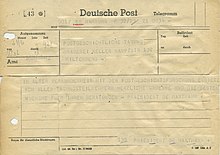 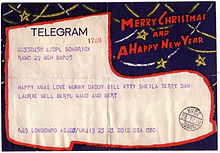 Congratulatory telegram from 1951, London to Japan

Telegram fees from the Reichspost

Telegram fees of the Deutsche Post of the GDR

Maritime radio service of the Deutsche Post of the GDR

A telegram (from the Greek tele : fern, far and gramma : letter, writing; literally telex or telex ) is a telegram transmitted message with the help of acoustic , optical or electrical devices. Telegrams were mostly transmitted by telex . Today (as of August 2020) they are hardly used anymore. Since the fee (previously fee) for a telegram is based on the number of words, a so-called telegram style has become established, e.g. For example, instead of saying “I will arrive on Friday at 5:00 p.m.”, the shorter “Arriving Friday 5:00 p.m.”, recipients could also request an abbreviated address, the “ wire word ”. Telegrams can still be delivered from the post office on decorative cards.

The expression telegram was coined in 1852 by EP Smith from Rochester ( United States ), who only replaced the common expression "telegraphic despatch " much later . Other terms were cable (or the verb kabeln derived from it ) or wire message , which referred to the transmission path .

The confidentiality of letters also applies to telegrams, i.e. H. the accepting employee may neither pass on the content to others nor falsify it.

Telegrams were a sensible facility at the end of the 19th and beginning of the 20th century because there were hardly any (private) telephones . Since the standard letter transit time was approx. 4 days, telegrams were the only way to deliver messages comparatively quickly.

A telegram was transmitted in three stages:

In 1870 it was possible to send telegrams to India.

The first picture telegram was sent and received in 1927 in the trial operation of picture telegraphy between the large Nauen radio system and the receiver at the Telefunken headquarters in Brunnenstrasse in Berlin-Wedding. The first international transmission took place in 1930 from Berlin to Nanjing, China, via shortwave . In 1978, according to the Deutsche Bundespost, around 13 million telegrams were sent.

Since December 31, 2000, Deutsche Telekom AG has stopped sending telegrams abroad. This is justified by the fact that the transmission route is technically outdated. The “Telegram” service will continue to be offered in Germany by Deutsche Post AG . It offers the possibility to send private greetings with an individual touch. There are also various Internet services that offer the sending of telegrams - also abroad. This “modern” form of telegram can only be compared to the previous one to a limited extent: some of the delivery - at Deutsche Post, if posted after 3:00 am - is not until the next working day, no longer within hours. The telegram has lost its importance as the communication network has been expanded and more modern data transmission options ( SMS , e-mail , instant messaging ) are now available.

A telegram was sent for the first time in Austria in 1847. Up to the outbreak of the First World War , the number of telegrams sent annually grew to 23 million in 1913. The competition from telephone , radiotelephone and telex that began a little later led to a decline in the use of telegram services from the 1920s. Until the end of the 20th century, however, congratulatory telegrams with pictures or with music in particular enjoyed even greater popularity. In 1984 a total of around one million telegrams were sent in Austria.

With the spread of e-mail and mobile telephony , telegrams finally lost their importance as a fast information service since the 1990s. So that gave Telekom Austria on 24 October 2005 known for economic reasons (only considerably less than 10,000 messages sent per month) this service on December 31 completely set. From January 2006 UTS GmbH (telegramm.at) took over the telegram service from Telekom Austria.

The Telegram Service was founded in 1850 by the East India Company . On November 5, 1850, the young Irishman William Brooke O'Shaughnessy sent the first telegram - from Calcutta to Diamond Harbor, a few kilometers away. In the year of independence from England in 1947, 20 million messages were sent with it, in 2012 only 40,000, although the population has quadrupled to 1.2 billion. On July 15, 2013, India ended the telegram service after 163 years. Most recently there were 75 telegram offices and the responsible ministry for telecommunications employed almost 1,100 telegraph operators. Telegrams were always delivered personally by messenger. The employees are to be deployed in other areas of Bharat Sanchar Nigam Limited . Until the introduction of an internet-based telegram service system in 2008, transmission was often carried out using Morse code telegraphy ; teleprinters were only used sporadically.

Other meanings in special fields

The term data telegram (also known as datagram ) is often used in computer science . Although they are used to transmit messages, they are not telegrams in the classic sense. Data telegrams are standardized data sets that are transmitted digitally (and typically serially ) and are mostly used for remote control and control purposes in system automation. For example, the bit information that the DCF77 time signal transmitter sends within one minute forms a telegram. See also under data package .