A tram consisting of a railcar (right) and a sidecar (left)

A sidecar , Switzerland car trailer (s) or trailer called, is a loose drive carriage of a tram or railway . It is pulled or pushed by a railcar or, more rarely, a locomotive and is used to transport passengers. In the case of the railroad, however, one usually speaks of a railroad car or passenger car , exceptions are listed below. If a sidecar runs between two railcars, it is a middle sidecar .

Sidecar at the tram

While in the horse trams introduced in the 1830s only one carriage was pulled by one or more horses, the steam trams operated from the 1870s made it possible for the first time to form trains in the tram sector . Since the tram locomotives used in the latter did not carry any passengers anyway, there was also no division into motor coaches and sidecars. 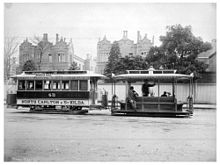 On the cable tram in Melbourne from 1885 onwards, so-called dummies , which were connected with the pulling rope, pulled ordinary sidecars behind them

This only changed in the 1880s with the introduction of electric traction . After the first electric tram, the Lichterfelde-Kadettenanstalt , went into operation in 1881 , the electric railcars were soon so powerful that they could also transport trailers. The Frankfurt-Offenbacher Trambahn-Gesellschaft (FOTG) already had sidecars with it when it opened in 1884. The first sidecars were often converted from old, usable horse-drawn trams, which were typically quite light. Thanks to increasingly more motorized railcars, new, heavier sidecars could soon be built, which were more spacious than the old horse-drawn tram cars. Most of the time, the manufacturers used the same car bodies for railcars and sidecars. Because the latter did not have to carry the weight of the electrical equipment and the pantograph , two-axle sidecars often had a simpler running gear without a special bogie and a lighter frame. While the railcars initially only pulled one sidecar behind them, three-car trains also appeared in the first half of the 20th century. On the other hand, associations with three or more sidecars were seldom, for example large four-axle vehicles with four two-axle trailers drove on the tram-like Innsbruck – Hall in Tirol local railway .

With the use of modern articulated cars from the 1950s, which roughly corresponded to an older railcar with a sidecar, the need for sidecars decreased. In some cases, no new sidecars were acquired, instead the articulated multiple units became longer and longer. Articulated sidecars are rare, examples of which are the four-axle vehicles in Bremen ( Hansa Waggon or Wegmann GB4) and Munich (Rathgeber series p ), the sidecar 1053-1058 of the RHB and the type c 6 from Vienna, even if these are only used on the Vienna U-Bahn line 6 were used. In a few cases, some companies also connected old two-axle trailers with one another at a later date; however, this design could not prevail.

But there were also sidecar, which were motorized, but otherwise no electrical devices such as pantographs or cab had so in Hanover DUEWAG - wide capacity trolley 1401 ff in this case, one usually speaks of. Guided motor coach .

The history of use of the sidecars differed greatly from one another, especially in the period up to the political change:

Most setup -Beiwagen have an auxiliary drive switch for shunting purposes at the rear end of the car, which bring technical control car makes. In addition to simple driving tasks, usually with only two driving and one braking level, indicators and door releases can usually be operated from the sidecar. In some cities, even planned rear-end drives to the next turning loop or the next track triangle were carried out in more remote areas of the route .

Sidecar at the railroad

Sidecar of a diesel railcar of FEVE of Ferrostaal in Inca ( Mallorca ), 1990

In the case of railways , the distinction between sidecars and ordinary railway wagons is mostly made for logistical reasons, as the use of locomotives and wagons is usually coordinated by different departments (e.g. depot and company car works ). The designation sidecar (assignment to the fleet of locomotives) makes it clear that a non-powered vehicle is usually used in special multiple units and must therefore be planned together.

In most cases, sidecars have been specially procured for use with a special series of electric multiple units or diesel multiple units so that they are technically and creatively adapted to this (example: VB 142 and VT 95 ). In some cases, however, ordinary passenger coaches were also used temporarily or permanently in multiple units, which were then usually technically modified accordingly ( control lines ) and were referred to as sidecars. Conversely, it could also happen that sidecars were still used in locomotive-hauled trains even though the railcars were no longer in use. However, they were no longer allocated to the general fleet if they could not be freely used.

The code letters were also introduced at the Deutsche Reichsbahn . However, only new buildings were given a new series designation.

Even after the introduction of the EDP numbers, the assignment to the locomotives was retained, which is why it was only carried out in Germany in 1968 or 1970. Today, non-powered vehicles (side, middle and control cars) have 800 numbers in electric multiple units and 900 numbers in diesel trains.

The term sidecar was also used for many secondary and local railways or small railways .