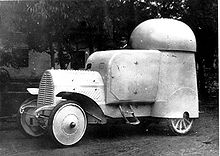 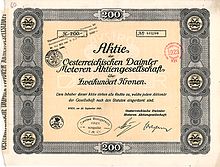 Share for more than 200 kroner in Oesterreichische Daimler Motoren AG on September 22, 1921 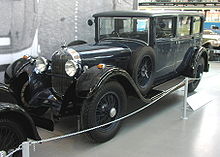 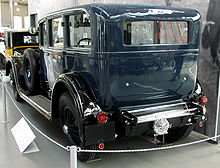 The company Österreichische Daimler Motoren Gesellschaft was founded as a subsidiary of the German Daimler-Motoren-Gesellschaft ( Cannstatt ). Austro-Daimler was the company's wire word and became its common abbreviation outside of the telegram system.

The Austrian Daimler-Motoren-Commanditgesellschaft Bierenz Fischer u. Co in Wiener Neustadt and Vienna was founded on August 11, 1899 with subscribed capital of 200,000 guilders as a subsidiary of the German Daimler-Motoren-Gesellschaft . Also involved: Eduard Bierenz , a friend of Gottlieb Daimler's , and Eduard Fischer , owner of an iron foundry. Eduard Fischer was thus a co-founder of the Daimler-Motoren-Gesellschaft, to which he belonged until June 1, 1920. He then took over the post of director of the "brass and metal goods factory Nadelburg " near Lichtenwörth , where he worked for Daimler a. a. also had coolers produced.

Skilled workers were exchanged between the main plant in Cannstatt and the new plant in Wiener Neustadt. For this time, the number of employees at the Austrian location is given as 70 to 80.

In 1900 the first automobile was manufactured in Wiener Neustadt, a four-seater with a two-cylinder engine. Production also included trucks, buses, marine engines and rail vehicles.

Gottlieb Daimler's son Paul joined the company in 1902 as a personally liable partner and also took over its technical management; Eduard Bierenz resigned as a partner in the company, which, after being renamed , traded as Oesterreichische Daimler-Motoren-Commanditgesellschaft .

From 1903 the world's first armored car was developed, which was presented to Emperor Franz Joseph I by Heinrich Graf Schönfeldt in 1906 , who did not recognize the potential and prevented the project because a horse was frightened.

A four-wheel drive car was built in the factory for the first time in 1905 . Paul Daimler left Wiener Neustadt to take over Wilhelm Maybach's position at the new Daimler plant in Stuttgart-Untertürkheim . Through the mediation of Consul General Emil Jellinek , Ferdinand Porsche succeeded Paul Daimler in the following year . Also in 1906 the name was changed to Oesterreichische Daimler-Motoren-Gesellschaft ; approx. 430 employees work in the plant.

In 1907 there were already 700 workers and 80 employees who built not only aircraft engines but also a racing car .

The year 1909 marked the separation between the German and Austrian Daimler plants. In 1910, with the participation of the Vienna Bank Corporation, an AG was founded to take over and continue the Oesterreichische Daimler-Motoren-Gesellschaft mbH under the name Oesterreichische Daimler-Motoren-Aktiengesellschaft . In the Prinz-Heinrich-Fahrt , the first three places could be achieved with a specially designed racing car. The co-designer Ferdinand Porsche drove one of the cars himself and became the race winner. He and his two racing colleagues, Graf Schönfeldt and Eduard Fischer , known as the “Iron Team”, shared the top spots at various racing events.

In 1911, the Austrian Emperor Franz Joseph allowed the company to use the imperial double-headed eagle in the company coat of arms, which made the Austro-Daimler car very well known.

In 1912, the German parent company Daimler sold the shares in Oesterreichische Daimler-Motoren AG that it still owned. This meant the final split of the two companies, which from then on were in competition with each other.

From 1913, the company was reorganized in a community of interests with the Škoda works ( Pilsen ). In 1914 about 900 employees were counted; With the beginning of the First World War, production was switched over to the needs of the military .

In 1917, at the instigation of the company, the construction of the 700-meter-long Wiener Neustädter towing station ( ) on the Pottendorfer line next to the north of the plant was tackled. Also included in the project was a standard-gauge, locomotive-operated siding system leading to the company property (see: Raxwerke for the location ).

At the end of the war in 1918, Austro Daimler was struggling with heavy debt, which was due to inflation and high prices for raw materials. The Škoda shares therefore had to be sold again for financial consolidation. The fulfillment of the Peace Treaty of Saint-Germain in 1919 required the destruction of all aircraft engines still in existence. The production of civilian vehicles began again .

During the First World War, the idea of an association appeared with the also the Castiglioni group belonging Fiat plants , Vienna, and the Puchwerken , Graz (see also Johann Puch ) on. In 1920 the board of directors was authorized to merge or join forces with the two Austrian automobile companies mentioned. For tax policy reasons, the administration decided to create a community of interests. This was not only financial, but also commercial and technical in nature. The purchasing and sales organizations and the design offices of the three companies were to be merged and combined at the Daimler plants. As a result, production was made more efficient through specialization and the Daimler works manufactured a large, modern, semi-frameless passenger car with a 6-cylinder engine and 11/70 hp. In addition to the production of their passenger car types, the Fiat factories concentrated on the manufacture of trucks and the Puch factories concentrated on the manufacture of motorcycles and bicycles.

In 1923 Ferdinand Porsche left the company after 17 years at Austro-Daimler and became a member of the board of directors and head of the design office at Daimler-Motoren-Gesellschaft in Stuttgart.

The distinctive hood ornament was

introduced around 1927 : the crossbow with an arrow surrounded by a ring. In 1927, the community of interests with the Fiat works was dissolved by the sale of Fiat shares. In 1928 the merger with the Puchwerke AG and the Österreichische Flugzeugfabrik AG to form Austro-Daimler-Puchwerke AG took place via a share swap .

In 1933 the Austro-Daimler plant in Wiener Neustadt was partially shut down, on June 30, 1934 car production was finally stopped and the machines were handed over to Steyr and Graz. On October 12, 1934, the merger with Steyr AG to form Steyr-Daimler-Puch AG . The construction of Austro-Daimler brand cars was completely stopped and production was limited to military and rail vehicles. For the continuation of the company's history see the article Steyr Daimler Puch AG, which also covers the former Steyr AG.

In the area of ​​rail-bound vehicles, the company concentrated on the rail bus market segment, which was viewed as particularly promising around 1930, and supplied railcars, sidecars and a few draisines to the Salzkammergut local railway , the Styrian regional railways and the Austrian federal railways .

In these vehicles, the car body was supported by leaf springs on the axles. These axles carried normal car tires. Each pneumatic tire, also known as a “carrying wheel”, ran in a steel drum, the inner diameter of which was only slightly larger than the outer diameter of the pneumatic tire. On the outside, the steel drum was designed as a railway wheel with a flange (= guide wheel). These guide wheels were each seated on an axle stub which surrounds the axle of the support wheels and is designed as a hollow axle and which had sufficient play to accommodate the relative movements between the guide wheel and the support wheel. Rubber buffers were used to limit the relative movements of the two wheels and also provided emergency guidance if the pneumatic tires failed.

The running gear construction could not prevail, however, the damping of the shocks emanating from the rails was too low. This not only impaired driving comfort, it also resulted in frequent malfunctions and the short life expectancy of the vehicles.

The BBÖ (short for the Austrian Federal Railways until 1938) bought their first railcar of this type ( VT 61.01 ) in 1932. This railcar weighed only 6.3 t when empty and was powered by an Austro-Daimler AD 640 six-cylinder engine, which ran at 3000 / min 80 hp (59 kW) and, as is usual with buses, was located on the front bulkhead next to the driver's seat. The VT 61 could only travel in one direction and therefore, like the VT 60 and 160, received a reversing device. The engine drove the front axle via a mechanical four-speed gearbox. The maximum permitted speed was 100 km / h.

The VT 61 had 24 seats. It was not possible to take sidecars with you. From August 5, 1932, it was running as scheduled on the southern railway between Vienna and Semmering.

Since the VT 61.01 had proven to be too small (but also too weak) from the start, the BBÖ tested another, somewhat larger Austro-Daimler railcar in 1932. This had the company name T 640 H 2 K and was built according to the same construction principles as the VT 61.01. Like its predecessor, the test vehicle only had an 80 hp AD 640 engine, but it was still a bit too small and, above all, too weak.

In 1933 the Austro-Daimler-Werke delivered six petrol railcars of the VT 62 series, developed jointly with Steyr-Puch, to the BBÖ. These were larger than the previous models, the number of seats could be increased to 45, including 9 folding seats . The VT 62 also had a toilet and a luggage compartment. For the VT 62.01 to 06, the BBÖ also procured six two-axle sidecars, designated as Cvt 150-155, whose car body was completely identical to that of the railcars.

The VT 62 already received two AD 640 engines, one on each end. The railcars already had a driver's cab at each end so that it was no longer necessary to turn the vehicle around when changing direction. The most notable innovation, however, concerned the power transmission, which here took place for the first time via a Voith fluid transmission. The hydraulic transmission consisted of a converter, which covered the lower speed range from starting up to about 60 km / h, and a hydraulic clutch, which was then used for switching.

In 1933 and 1934, Austro-Daimler-Werke built two four-axle petrol railcars specifically for long-distance transport, which the BBÖ designated as the VT 63 series. These extremely sleek-looking railcars reached a top speed of 100 km / h. They had 56 leather-upholstered seats as well as another 18 folding seats.

The service weight when unoccupied was 19.3 t. The same engines and gearboxes were installed as in the VT 62 series. On each bogie there was a motor that acted on an axle via a fluid transmission [axle sequence (1A) ´ (A1) ´]. It was not possible to take trailers with you.

The VT 63 drove primarily in city express traffic on the southern runway. On the routes Vienna - Salzburg and Vienna - Budapest there were special press trips, which were followed by some newspaper reports, but no planned operation with these vehicles. After initially good results, it soon became apparent, as with the VT 62, that the engines were too weak, especially for driving uphill, and were therefore overloaded, which in turn led to frequent damage. Since the diesel engines of the VT 41 series diesel-electric multiple units, which were built at the same time according to the principles of rail vehicle construction and were correspondingly heavy and massive, proved their worth, the BBÖ decided to install diesel engines in the VT 63 series multiple units Vorarlberg company Oberhänsli proved itself well, but the vehicle construction did not withstand the stresses of the railroad operations.

Almost all Austro-Daimler railcars were destroyed in the Second World War, only two undamaged VT 63 remained in Austria. They were no longer put into operation due to their poor condition (due to years of lack of maintenance).

Ultimately, however, only one was left of the innovations introduced in the Austro-Daimler railcars that were also used in later railcars: hydraulic power transmission.

Received rail vehicles are not documented. In Sweden, however, there are still assemblies of an Austro-Daimler narrow-gauge railcar in railway museums.