from Wikipedia, the free encyclopedia
This is the spotted version , flagged on June 22, 2020 . There are 3 pending changes that have yet to be viewed.

Railways to the Orient were planned several times for this area , but never realized.

For the connection line planned by several factory owners at the beginning of the 1860s between Raaber (kk priv. Oesterreichische Staatseisenbahn-Gesellschaft ) and Gloggnitzer Bahn ( kk priv. Südbahn-Gesellschaft ), a concession was issued on September 30, 1864, according to which the railway In 1868 at the latest it should have gone into operation. Despite the wealth of the concessionaires and their co-interested parties, they could not agree on financial issues, and after the unsuccessful attempt to obtain tax exemption at a later date, the concession was returned.

According to the newly obtained concession document of August 23, 1869, for the construction and operation of a locomotive railway from Wiener-Neustadt to Grammat-Neusiedl , the railway (4.290 post miles or 32.5 km long) via Wampersdorf was opened on September 1, 1871 (for People and goods) opened ( Wiener-Neustadt-Gramat-Neusiedler Railway ). The line had the following seven stations when the traffic was handed over: Neustadt, Ober-Eggendorf, Ebenfurth, Pottendorf-Landegg, Unter-Waltersdorf, Mitterndorf, Gramat-Neusiedl.

Among the many railway projects of that time, the railway to be run on the right bank of the Danube from Vienna to Pressburg was the one whose realization would connect the capital of the Reich to the still young Transleithanien by the shortest route and would therefore be of corresponding importance from an economic point of view. Shortly after the Neustadt – Grammat-Neusiedl railway went into operation , the plan was to connect a Vienna – Preßburg railway with a line from Fischamend via Neusiedl , Schwadorf and Ebergassing to the connection station at Gramatneusiedl. 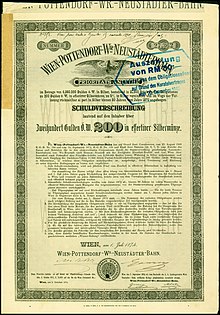 Debenture for 200 guilders of the Vienna-Pottendorf-Wr.-Neustädter-Bahn dated July 1, 1874

On September 10, 1872, the Wiener Bank-Verein received a concession to build and operate a locomotive railway from Vienna via Inzersdorf to Pottendorf and to the Hungarian border towards Oedenburg, and in 1875 also achieved a merger of this railway with the existing railway company into a legally registered railway company , the company Wien-Pottendorf-Wiener-Neustädter Bahn .

The line between Wampersdorf and Vienna Blumental (formerly Inzersdorf Metzgerwerke) opened on May 7, 1874. The piece between Blumental and Meidling followed on November 3, 1875 and ran on an elevated route, which was destroyed in the Second World War. Since then, the Donauländebahn has been used here , but the old route was still visible until 2005 until the two-track expansion.

With the timetable change on December 13, 2009, the Vienna Blumental train station was closed. After dismantling and renovation, the station was reopened on August 1, 2011 as the Wien-Blumental stop north of the old location; the Vienna Inzersdorf stop was closed.

Listed reception buildings are located in Ebreichsdorf - this is still in operation - and in Unterwaltersdorf . The latter was abandoned as a result of the suspension of passenger traffic between Gramatneusiedl and Wampersdorf, which took effect on December 15, 2002, and now houses a local history museum.

The double-track expansion of the 50 kilometer long Pottendorfer line between Vienna Meidling and Wiener Neustadt is an important measure to expand capacity on the southern route. On June 26, 2016, Franz Bauer, CEO of ÖBB-Infrastruktur AG, and Lower Austria's transport councilor Karl Wilfing, together with Jozef Vasak from the European Commission gave the official go-ahead for upgrading the line.

In December 2016, the Vienna South Freight Center with facilities for container handling, contract logistics and conventional wagonload traffic, which was built in the area of ​​the former Inzersdorf Freight Station, went into operation.

The transport services Vienna-Inzersdorf and Vienna-Blumental were merged and moved to the newly built tower in the area of ​​the Vienna South freight center.

The Achau and Münchendorf train stations were also replaced by new buildings, which were opened together with the now double-track section Vienna Blumental - Hennersdorf - Achau - Münchendorf on November 22, 2019.

The Pottendorfer line is expected to be fully double-tracked by 2023 in order to relieve the busy southern line between Wiener Neustadt and Vienna and to create new capacities for passenger and freight traffic. A large part of the ten kilometer route around Ebreichsdorf still to be expanded as of the end of 2019 will be built as a new route in a different location around one kilometer east of the previous route. The Ebreichsdorf train station will be relocated to the east "on the green meadow" from the previous local area, bringing Unterwaltersdorf closer to the Pottendorfer line. A new city district is to be built around the new train station as part of the Ebreichsdorf Smart City project.