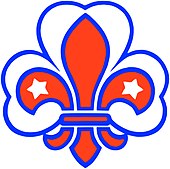 Logo of the ISGF

The International Scout and Guide Fellowship (ISGF) is the world association of old scout organizations . It was founded in 1953 and is recognized by the two world scout youth associations WOSM ( World Organization of the Scout Movement ) and WAGGGS ( World Association of Girl Guides and Girl Scouts ). The association is an advisory member of UNICEF (United Nations International Children's Emergency Fund, UN Children's Fund) and participates in projects of UNHCR (United Nations High Commissioner for Refugees, UN High Commissioner for Refugees). The association languages ​​are English and French .

Already in 1931 from the founder of the Boy Scouts, Lord Robert Baden-Powell , the first indications came about a union of old scouts.

In 1933 the first national association, the “St. George's Guild Denmark ”. Since after 1945, old scout associations emerged in many countries, these demanded the creation of a worldwide association. Negotiations with WOSM and WAGGGS lasted until 1952, and on October 23, 1953 the International Federation of Former Scouts and Guides (IFOFSAG; French Amitié Internationale des Scouts et Guides Adults , AIDSEGA) was founded. The membership at that time was 40,000 men and 5,000 women.

The founding day of October 23rd has been celebrated as World Friendship Day in all guilds since 1964.

The ISGF is responsible for the administration, organization and growth of the worldwide guild movement. It organizes international meetings, maintains contact with youth associations, international and state institutions and coordinates all cross-border activities.

A world conference takes place every three years (most recently in Como in 2011 ), at which the world committee (eight members from eight countries) is elected. The chairman is the president, the world committee is the governing body of the ISGF, it also includes representatives from WOSM and WAGGGS. The World Office is responsible for ongoing work in the association and is headed by a Secretary General who has a seat on the World Committee. The World Office is based in Brussels .

All countries that have at least 125 guild members are full members, with four delegates to the World Conference (regardless of size). These regional associations are called "National Fellowships" (NF). Countries that have not (yet) reached this number are associated NFs that only have a seat but no voting rights. Adults in whose countries no recognized guild association exists and who submit to the principles and goals of ISGF can join the Central Branch (CB - Zentralgilde) directly. The CB also has four votes at the world conference.

Logo of the Central Europe sub-region

There are 5 regions, four sub-regions (in Europe) and the Central Branch.

The seven National Fellowships with the largest number of members are Great Britain, Italy, Denmark, Belgium, the Czech Republic, Australia and Austria.