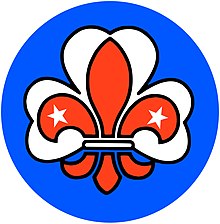 The Austrian Scout Guild (PGÖ) is the umbrella organization for all scout guilds in Austria . Each guild is an association of guild scouts (formerly known as old scouts). The PGÖ is a member of the International Scout and Guide Fellowship (ISGF), the international guild organization in the Europe region, Central Europe sub-region. The association currently has around 3,300 members who are organized in 103 guilds (as of 2008).

Already during the first republic (1918–1938) there were the first old scout guilds within the Austrian Scout Association (ÖPB) since 1922. In 1936 the Austrian Association of Former Scouts was founded, which was dissolved by the National Socialists in 1938 .

Inspired by the St. Georgs Gilde Denmark, after the Second World War, old scout guilds emerged in Austria from 1948. These guilds were (as in 1922) the fourth age group of the ÖPB; Associations with loose ties to the main groups. Despite the departure of former ÖPB groups in 1951 from the joint association PÖ, ÖPB guilds and PÖ clubs merged to form the Association of Old Scout Guilds of Austria (VAPGÖ) on March 17, 1953 . 11 member associations with 291 old scouts were the beginning of the common guild movement in Austria. The name was changed to the Austrian Scouts Guild (PGÖ) in 1979 .

Since October 23, 1953, the association has also been a founding member of the International Federation of Former Scouts and Guides (IFOFSAG), renamed ISGF in 1996. The PGÖ belongs to the Europe region, in 1991 it was involved in the establishment of the Central Europe sub-region.

Outside the PGÖ there are also some guilds or old scout clubs that are either related to the ÖPB or the PPÖ and, for various reasons, do not want to be bound by a central association.

The PGÖ is responsible for the administration, organization and distribution of the guild movement in Austria. It is the link to the ISGF and to international and local institutions. She helps the guilds with events, campaigns, contacts across borders and coordinates this. It also provides publications and working aids.

The association board, elected by the general assembly, which takes place every three years, is the governing body of the PGÖ.

There are 8 districts and the central guild

Each individual guild is an independent association according to the Austrian Association Act .

For all officials there is a comprehensive multi-level training opportunity and the forum for managers. As part of the Woodbadge courses , the level “Diplom-Gildemeister” or “Diplom-Gildefunctionär” (“Woodbadger”) can be achieved analogously to the youth associations; see also leadership training at Gilwell Park .

True to the motto of Lord Robert Baden-Powell : “Once a boy scout - always a boy scout!” , The guild scouts who have exceeded the age limit of the youth associations (usually 20 years), former, but also active youth leaders, as well as all adults who were not scouts, but affirm the goals and want to support the educational work of the youth groups.

Members can wear a blue scarf with the PGÖ lily.

The PGÖ is the seventh largest guild association worldwide after Great Britain, Italy, Denmark, Belgium, the Czech Republic and Australia (as of 2007).

We are a world community of adults who affirm a way of life that is based on the basic values ​​of scouting. We want to develop our talents and abilities, use them and put them at the service of the community; seek the way to God in the spirit of faith; Practice tolerance, respect and understand others, and try to help them; respect individual and community freedom as long as the freedom and rights of others are not impaired; Realize our commitment to our Austrian homeland and our democratic understanding more strongly; not only take part in culture, but also promote and help shape it; protect and preserve all areas of nature and help prevent destruction of the environment; Promote the Scout Movement to the best of our ability.

In the spirit of global scouting that unites peoples, we promise to work for the fulfillment of these laws at all times.

Aktion 100 is a disaster fund of all guilds of the Association Scout Guild Austria for support in financial emergencies. The name is derived from the initial idea in 1988 that all guild members should donate ÖS 100 as start-up capital. The help is intended for people who got into an emergency through no fault of their own, regardless of whether they are guild members, scouts or other people. Between 1996 and 2011, 24 applications were processed positively.

In 1969 a regional guild meeting of the Alpine countries took place in Grossarl (Salzburg) with 94 participants from five countries. From this the European Forum of Guild Scouts developed . Since then, 300 to 500 guild scouts from more than 15 countries have met annually for a week of joint activities. Guest speakers so far have included Otto von Habsburg , the spaceman Franz Viehböck , the Austrian National Bank President Stephan Koren , the German Member of the European Council Günther Müller , the computer pioneer Heinz Zemanek , the artistic director of the Salzburg Festival Gerard Mortier and also the former EU Commissioner for Agriculture Franz Fischler . The 10th and 20th anniversary forum was opened by the current Austrian Federal President . In addition to some domestic social activities, a well was built in Ethiopia in 1999 with donations from guild scouts from all over Europe as part of Menschen für Menschen .

There are three monuments of the guild scouts in Grossarl: