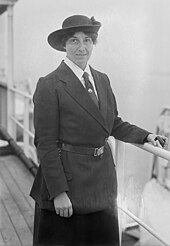 Olave was born to brewery owner and artist Harold Soames and former governess Katherine Hill. She was always tutored by a nanny or her parents and never went to school.

In January 1912, Olave met the war hero and scout founder Robert Baden-Powell on the ocean liner Arcadia on a trip to New York . They fell in love, married on October 30, 1912, and later had three children (Peter, Heather and Betty). In 1914 she offered her help to the Girl Scout Committee. Originally the girl scout movement was founded by Robert Baden-Powell and his sister Agnes Baden-Powell . Initially, however, Olave's collaboration was rejected by Agnes Baden-Powell. A little later she was asked to organize the girl scouting work in the county of Sussex. At the Conference of Regional Leaders in October 1916 she was elected Chief Commissioner. She traveled the world as the leader of the English Girl Scouts and built new groups. In 1930 she was elected World Leader of Girl Scouts. Since her husband was promoted to Baron Baden-Powell in 1929, she carried the courtesy title Baroness Baden-Powell as their wife . In 1932 she was ennobled herself as the Dame Grand Cross of the Order of the British Empire . In the same year she opened the first WAGGGS world center “ Our Chalet ” in Adelboden in the Bernese Oberland ( Switzerland ) .

In October 1939 Olave left her husband and Pax Hill in Bentley (England) and moved into their new home Paxtu in Nyeri ( Kenya ), where he died in January 1941st In 1942, Olave returned to England and stayed at Hampton Court Palace , which was a great honor from the royal family.

Olave continued to work for the girl scout movement. She wrote articles, gave interviews and traveled around the globe to promote boy scouts and international understanding. In 1956 she participated in the inauguration of Our Cabaña , Mexico , one of the four world centers of WAGGGS. In 1957 she bought a new house for Our Ark (Our Ark) , the then world center of WAGGGS in London.

Scouts call their birthday together, February 22nd, Thinking Day , to commemorate and celebrate the work of the Baden-Powell couple. Every year the world association WAGGGS collects money for poorer girl scouts associations on Thinking Day.