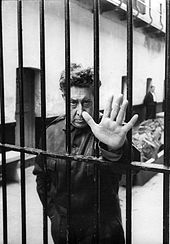 Siqueiros began his artistic training in 1912/1913, initially at the Academia de San Carlos in Mexico City. At the time, the country was in the civil war of the Mexican Revolution . From 1914 Siqueiros fought in the army of the constitutionalists , in 1918 he was sent to Europe as a military attaché . So he learned in Paris the painter Diego Rivera know. With him he developed the basic ideas of muralism , a special school of wall painting that refers to indigenous Mexican and European traditions.

After his return to Mexico in the early 1920s, Siqueiros, like other painters from the group of muralists (Diego Rivera, José Clemente Orozco ), received his first commissions to paint large wall surfaces in public spaces. The first murals were created in 1923 in the Escuela Nacional Preparatoria (The Elements and The Myths) .

Like Rivera, Siqueiros was a staunch communist and revolutionary throughout his life , many of his paintings are a committed testimony against oppression and exploitation and glorify the Mexican revolution.

Siqueiros' political activism, however, did not go uneventful: in 1940 he led a conspiracy to murder Leon Trotsky, who had been in exile in Mexico since 1937 . Trotsky, the most prominent critic of Stalin's dictatorial system in the 1930s , appeared in Mexico in a “counter-trial” to the Moscow show trials chaired by John Dewey ; Siqueiros, on the other hand, was a staunch Stalinist at this time. Trotsky survived the raid on his house and escaped the machine gun volleys by taking cover under his bed - but three months later he was murdered by Stalinist agent Ramón Mercader .

Siqueiros spent several months in prison for the assassination and was then expelled from Mexico for several years. Until his death he received commissions for important public buildings in Mexico, such as the Castillo de Chapultepec , the former presidential palace, and the Palacio de Bellas Artes , where his works can still be seen today.

Siqueiros not only worked in Mexico, he was also a professor at the Chouinard School of Art in Los Angeles from 1932 to 1933 and worked in Chile in the city of Chillán in 1941 . There you can still see his murals in the library of a school, the Escuela República de México, which were donated by the people and the government of Mexico after the earthquake of January 24, 1939. Siqueros was a member of the Academia de Artes . He was married to Angélica Arenal , Luis Arenal's sister .