The Interstate 70 (abbreviated I-70 ) is part of the Interstate Highway System in the United States . It begins in Cove Fort , Utah on Interstate 15 and ends in Baltimore , Maryland on Interstate 695 . It was the first interstate to be built. It follows the US Highway 40 east of the Rocky Mountains .

Building the I-70 in Colorado and Utah was a major technical achievement. For example, the Eisenhower Tunnel and routes through Glenwood Canyon and San Rafael Swell were built. The Eisenhower tunnel is the highest point of the interstate highway system at 3400 m.

The last section of the Glenwood Canyon was opened to traffic in 1992 .

Major cities on this highway

The I-70 in Glenwood Canyon in the Rocky Mountains 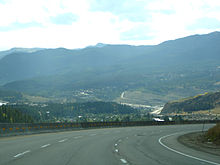 To this day, Interstate 70 is not a completely intersection-free route. There is a brief interruption at the merge with the Pennsylvania Turnpike . There is no motorway triangle there. The eastern portion of I-70 ends in Breezewood. From there the traffic is directed to the Turnpike entrance at Breezewood, which is subject to a toll. The reason is that the common route with the Pennsylvania Turnpike is chargeable, but the eastern part of I-70, which connects Pennsylvania with Maryland, is toll-free. A direct connection has not been built to this day, as this would result in the establishment of another toll station.