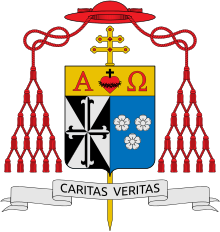 Felix-Raymond-Marie Rouleau entered the Dominican order after finishing school and studied philosophy and Catholic theology in various houses of the order . On July 31, 1892, he received the sacrament of ordination and then became professor at the College of Dominicans in Ottawa , which he also headed for several years as rector . From 1919 to 1923 he was Provincial of the Dominican Province of Canada.

On March 9, 1923, Pope Pius XI appointed him . to the Bishop of Valleyfield . He was ordained bishop on May 22, 1923 by Pietro di Maria , Apostolic Delegate in Canada. Co- consecrators were the coadjutor archbishop of Montréal , Georges Gauthier , and the bishop of Alexandria in Ontario , Félix Couturier OP.

On July 9, 1926, Pope Pius XI appointed him. to the Archbishop of Québec. On December 19, 1927 he accepted him as a cardinal priest with the titular church of San Pietro in Montorio in the cardinals college .

Felix-Raymond-Marie Rouleau died on May 31, 1931 in Québec and was buried in the local cathedral .