The title of this article is ambiguous. For the journal of the same name see epoc , for the term from sports science see EPOC (sports science)

The EPOC operating system [ ˈɛpɒk , ˈiːpɒk ] was developed by Psion for PDAs (Personal Digital Assistants). EPOC is the direct predecessor of Symbian OS (from EPOC version 6), which is used exclusively on smartphones.

It is a multitasking 32-bit operating system . It is considered to be very stable, offers a clipboard, printer support and the possibility of inserting objects from other applications into documents. The EPOC contains some office programs that are comparatively powerful for PDA conditions. They made EPOC very popular in the business world.

EPOC was originally designed for pure keyboard PDAs without a touchscreen such as the Psion Series 3. Since the further development of EPOC32, EPOC is also touchscreen compatible.

“EPOC” usually means EPOC32, which was released in 1997 for 32-bit processors of the ARM family. Psion delivered the Series 5, Series 5mx, Series 5mx PRO (this model was only sold in Germany), Revo , Revo Plus, Series 7, netBook and netpad with EPOC.

The previous version EPOC16 ran from 1989 on Psion's SIBO devices (Sixteen Bit Organizer) or 16-bit processors of the 8086 family. Psion sold the devices MC200, MC400, Series 3, Series 3a, Series 3c, Series 3mx, Siena, Workabout and Workabout mx with this operating system version. The workabout for industrial applications was manufactured until 2004.

The further development of the operating system was transferred to Symbian Ltd. in 1998 . outsourced, in which besides Psion also Ericsson , Motorola and Nokia participated. The renaming to Symbian OS took place with EPOC version 6.

The surfaces of the operating system and the programs can be operated with the touchscreen or the keyboard, whereby, in contrast to Windows XP Tablet PC Edition or Palm OS 5.2 (Sony UX50), both input types are equally comprehensively supported. The operating concept is similar to the familiar desktop environments of the common Windows , macOS and Linux operating systems . There is a desktop with folders, files and most of the installed programs. From there, other programs and the system control can be called up. A command line can also be made available using various additional programs.

Up to ER5 (EPOC Release 5) only EIKON was used as the surface. The last Psion PDAs manufactured also used version 5.

EPOC applications are designed for landscape format displays. They can be operated with a keyboard and a touchscreen pen. The scope of delivery usually included an appointment manager, a word processor, a spreadsheet, a simple OPL database and various auxiliary programs. 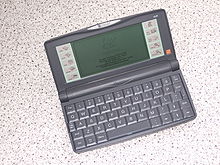 As early as 1997, a licensee for EPOC was found in Geofox. Another product based on EPOC appeared with the Osaris from Oregon Scientific. Versions 2 and 3 were available for the Series 5 and the Geofox One, version 4 for the Osaris.

The R380 from Ericsson (ran with ER 5 in a Unicode version and its own user interface without the possibility of expansion) was one of the first mobile phones to have a touchscreen. Just like the Philips Illium smartphone, which was not brought to market, it anticipated the design of the Sony Ericsson models P800 and P900 with a foldable keyboard and a large touch-sensitive screen and operation geared towards the touchscreen.