The Hawker Typhoon was a fighter aircraft belonging to the British Hawker Siddeley Aircraft Co. It was used by the Royal Air Force (RAF) from 1941 during the Second World War . The machine, with its successor, Tempest, was one of the largest and heaviest fighter aircraft of its time. Because the Typhoon could not achieve the necessary flight performance for the intended task as an interceptor due to the "thick" wing profile above 6100 m (20,000 feet), it was finally used as a fighter-bomber . The single-engine and single-seat machine was manufactured by the Gloster Aircraft Company, which was owned by Hawker Siddeley built. 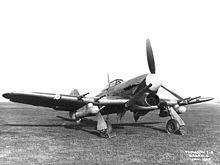 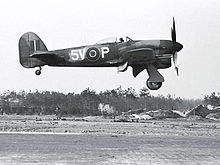 At Hawker Aircraft , Typhoon development began in March 1937, under the direction of chief designer Sidney Camm, directly after that of the Hawker Hurricane . The specification F.18 / 37 from January 1938 was used as the basis. This envisaged a fighter based on the similarly designed Napier Saber (24-cylinder H engine ) or Rolls-Royce Vulture (24-cylinder X engine ), both of which had more than 2,000  hp .

Two designs, "R" and "N", were produced, with the R-type receiving the Rolls-Royce engine. The nose section of the aircraft was more rounded here and the machine received a round radiator. On the N-Type with the Saber engine, the radiator was placed under the engine. Both models were given a front fuselage in tubular space construction made of welded steel; the rear area was constructed in half-shell construction. The wing profile was much thicker than that of the Supermarine Spitfire .

The R-Type, called the Hawker Tornado , flew in October 1939 and the RAF immediately ordered 1,000 units. Defects in the construction quickly became apparent; Noticeable compressibility effects occurred at high speeds . The climb performance did not come close to that of the Spitfire. The R-Type was therefore no longer an option as a replacement for the Spitfire in the role of interceptor.

The N-Type, called Typhoon , made its maiden flight in February 1940. It was to be manufactured by the Gloster Aircraft Company . The RAF ordered large numbers; however, there were also defects in the N-type. Parts of the wing paneling came off due to engine vibrations. Both orders were then initially canceled. However, work on the types continued on a small scale; the aerodynamics were improved and a thinner wing profile was installed on a trial basis. At Hawker's initiative, radial engines of the Bristol Centaurus type were also installed on a trial basis .

Efforts to correct the problems have shown some success; a series of Hawker tornadoes was delivered in the spring of 1941 and proved its efficiency with a maximum speed of 685 km / h. At this time, however, Rolls-Royce stopped producing the unreliable and immature Vulture engines.

Therefore, Hawker concentrated on the manufacture of the Typhoon. The first series of Mk IA twelve Browning machine guns caliber .303 British (7.7 mm) was delivered in May 1941st The effect of the machine guns was too little and so the next series, the Mk IB, was equipped with four 20-mm automatic cannons of the Hispano Mk. II type.

As the successor to the Typhoon, Sidney Camm designed the similarly constructed Hawker Tempest . Her wing had a laminar profile ; it could be used as a fighter-bomber and as a fighter.

The total production of the Typhoon, manufactured exclusively by Gloster, was 3,330 machines.

A Hawker Typhoon fires a volley of four RP-3 missiles

After the Focke-Wulf Fw 190 , which was much faster than the Spitfire V, increasingly intervened in the aerial combat over England , the likewise very fast Typhoon was also sent into the aerial combat. After 150 machines had already been delivered, there were a number of crashes that were initially erroneously attributed to a failure of the rear fuselage structure. Further investigations showed, however, that the breaking away of the mass balance on the elevator led to its flutter, which caused overloading of the rear fuselage and the breakage of the transport connection between the fuselage parts. The error could be corrected by replacing a part that cost only a few shillings.

Nevertheless, the Typhoon could not prove itself either as an interceptor against the Focke-Wulf Fw 190 or as an escort fighter for the British bombers flying into northern France . Since the Spitfire IX, a sophisticated high-performance fighter, had meanwhile gone into series production, there was no longer any need for the Typhoon as a fighter aircraft.

However, there was a need for a powerful fighter-bomber. The machines were then used for deep attacks in northern France and in combat in Normandy . They accompanied the Allied troops through France and Belgium . For this they were also equipped with unguided rockets of the type RP-3 (Rocket Projectile 3 inch ).

The Typhoon was built by Hawker and Gloster in Great Britain. 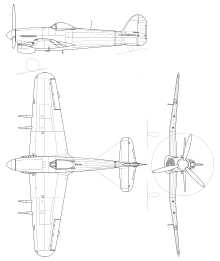 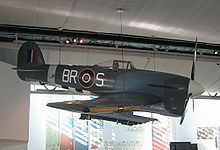 A Hawker Typhoon is in the Memorial de la Paix in Caen / France (see photo), the Royal Air Force Museum in Hendon also has a copy.