The Hawker Hart was a British biplane - fighter aircraft of the 1930s.

The model was based on the specification 26.12 of the British Air Ministry that a bomber in all-metal design foresaw the unprecedented speed of 257 km / h. This performance was achieved by combining the world-class airframe with the Rolls-Royce F.XIB V-12 engine . The prototype with the RAF serial number J9052 and Fl.Lt. PWS Bulman at the wheel first flew in June 1928. Commissioning took place in January 1930 at No. 33rd Squadron of the Royal Air Force in Eastchurch.

Due to its speed, the Hart was temporarily used as a fighter aircraft for No. 23 (Fighter) Squadron. After the experience of this unit with the "Hart Two-Seat Fighter", an improved special combat version should be developed. The result was the Demon , which differs from the Hart mainly with a new version of the Rolls-Royce-Kestrel engine, a modified rear cockpit with a better field of fire, the installation of a radio system and, in some later series machines, a rear wheel instead of the tail spur difference. Hawker built Demon for the RAF 234 and the RAAF 54. In addition, a school version called "Mk II" was created in a series of ten machines with double control and target towing device.

In addition to the standard bomber version, the Hart developed a liaison aircraft variant (Hart Communications), tropicalized variants (Hart (India)) and (Hart (Special)) as well as a school version with double controls. The first aircraft also experimented with folding surfaces for use by the Royal Navy and floats. The series versions were given the name Osprey .

When the Hart was replaced by the Hind in 1936 , a considerable number of the machines were delivered to South Africa. Others went to Estonia (8) and Sweden. Yugoslavia had four Hart on duty in 1931.

Approval of the Hawker Hart by the RAF:

The Hawker Hart was built in series in Sweden by ASJA, CVM and Götaverken.

Acceptance of the Hawker Hart by the Swedish Air Force:

Eight Hart aircraft were also delivered to Estonia in 1932 as new aircraft. All other export deliveries are used RAF aircraft. Thus 1,001 Hawker Hart were produced in Great Britain and Sweden. 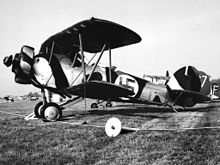 Swedish B 4A of the Flygvapenmuseum with Finnish badges

In 1933 the Swedish Air Force ordered a trial delivery of three machines, which arrived in May 1934 and were given the designation S 7. One of the machines was equipped with floats . 9-cylinder radial engines Bristol Pegasus I M2 were installed . License production began and in 1936 the first seven Hart made in Sweden were delivered. In the same year a new order for 35 more aircraft was placed. The machines soon proved to be suitable for use as dive bombers and were therefore given a new designation in 1937, with B 4 for the machines built in Great Britain and B 4A for the machines built in Sweden. The engines, NOHAB Mercury VIIA , were also manufactured under license by NOHAB . Two aircraft were equipped with more powerful Bristol Perseus XI engines and were given the designation B 4B. The last machines were delivered in 1939.

A total of 45 Swedish Hart were produced. 21 was supplied by the Malmen Air Force Factory , 18 by ASJA in Linköping , and three Götaverken in Gothenburg .

Four aircraft were used in the Soviet-Finnish winter war of 1939/40. Three of them were destroyed at the beginning of the fighting, whereupon another machine was dispatched on February 16, 1940. Most of the rest of the machines were decommissioned between 1941 and 1944, but some remained with the troops as tow planes until 1947.

In total, including the licensed versions, more than 1000 Hart with different engines were built.