The title of this article is ambiguous. Further meanings are listed under Thießen (disambiguation) . 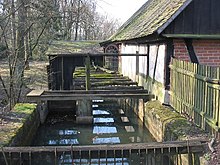 Since September 1, 2010, Thießen has been part of the city of Coswig (Anhalt) in the Wittenberg district in Saxony-Anhalt , Germany. On June 30, 2010 there were 669 inhabitants in Thießen.

The village of Thießen on the southwestern edge of the Fläming is located in the Rossel valley . This small river flows into the Elbe about 10 km south of Thießen . The area is very wooded, the Möllelberg west of Thießen reaches 109  m above sea level. NN .

The last mayor of the community was Günther Lutze.

The coat of arms was approved on May 9, 2003 by the Dessau Regional Council.

The colors are silver (white) - blue.

The Thießen copper hammer is a technical monument and the only copper hammer in Saxony-Anhalt . It is located in an approximately 1 hectare park. The river Rossel , which flows through the green area, is dammed up above the hammer system to form a pond, which partially flows off freely, but is also used to drive the water wheels .

The copper hammer was first documentedly mentioned in 1603 and is therefore more than 400 years old. With the construction of several buildings, the complex grew into a four-sided courtyard, which in 1958 was placed under monument protection in its entirety .

Various devices such as washing kettles and stills were manufactured in the Kupferhammer until 1960 and work was only stopped completely in 1974. In 1983 the complete renovation and conservation of the copper hammer began. Thus, after several years, the system could be produced in its current form.

Today the Kupferhammer Thießen offers a technical demonstration system that provides an insight into the craftsmanship and technical possibilities of the 17th century. There is also a café in one of the buildings and a small exhibition of old technical equipment in another.

A water mill on the Rossel drives two mill wheels, a medium-sized one for the hammer mill and an overshot one for the associated blower.

The medium-sized water wheel moves a large wooden shaft on which there are two cam rings . These raise the tiltable lever arm about 40 cm, to which the actual hammer is attached. Due to its own weight of several hundred pounds, the hammer falls back onto the anvil. This surcharge is used to process the copper.

By regulating the water supply, the rotary movement of the shaft and thus the frequency of the hammer blow can be influenced, a maximum of 120 blows per minute can be achieved.

Thießen is on the road from Dessau-Roßlau to Wiesenburg / Mark in Brandenburg . The federal road 187a from Zerbst to Coswig (Anhalt) leads through the neighboring village of Hundeluft . The Köselitz and Coswig junctions on the Federal Motorway 9 (Berlin – Munich) are around 20 kilometers away.

Thießen had a stop on the Wiesenburg – Roßlau railway line (Berlin – Dessau line). This has not been used since December 9, 2012.