The title of this article is ambiguous. Further meanings are listed under Serno (disambiguation) . 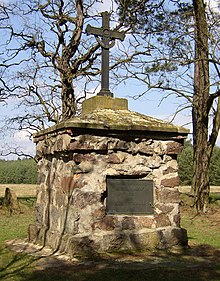 Since January 1st, 2009, Serno has been part of the town of Coswig (Anhalt) in the Wittenberg district in Saxony-Anhalt (Germany).

The area of ​​the Serno district in Hohen Fläming , which is 80 percent covered by forest, extends from the state border with Brandenburg to the valley of the upper Rossel . Serno lies between Coswig (Anhalt) and Wiesenburg / Mark . Near the neighboring town of Göritz, the relief reaches a height of 181 meters.

On July 1, 1950, the previously independent communities of Göritz and Grochewitz were incorporated.

On July 1, 2007, the formerly independent municipality of Serno was incorporated into the Wittenberg district due to a district reform of the former Anhalt-Zerbst district.

The coat of arms was approved by the district on March 19, 2008 and registered in the Magdeburg State Archives under the coat of arms roll number 9/2008.

Blazon : "Divided by silver and green, at the top a black boar with red tusks, at the bottom between two silver oak leaves trailing the edge of the shield, three bars of silver vertical clapboard, the middle one is extended."

Serno carried a picture seal that shows a boar (wild boar) in front of a tree. In its present form, this seal image could not be used for a coat of arms because this motif had already been assigned (Wörlitz 1994, Roxförde 1996) As the municipality wanted to be based on the old seal image in such a way that it could be approved, a redesign was necessary carried out by the Magdeburg municipal heraldist Jörg Mantzsch . The boar remained the central figure in the coat of arms. In addition, in the sense of pars pro toto, oak leaves and the special feature for the town of Serno - the bells for the church, a technical masterpiece - have been added.

The flag is striped green and white. The municipal coat of arms is placed in the middle of the flag.

The bells of the St. Jacobus Church, consecrated in 1830, are an unusual architectural monument . It was an inexpensive alternative to expensive bells, which the residents of the time - Teerschweler , Köhler and estate workers - could not afford.

The federal road 107 (Coswig (Anhalt) –Wiesenburg / Mark) passes east of Serno . The Köselitz motorway junction of the federal motorway 9 (Berlin – Munich) is only a few kilometers away from Serno. The nearest train station is in Jeber-Bergfrieden, six kilometers away (railway line from Dessau-Roßlau to Potsdam - Wiesenburg – Roßlau railway line ).