Cobbelsdorf has been part of the town of Coswig (Anhalt) in the Wittenberg district in Saxony-Anhalt (Germany) since January 1st, 2009 .

Cobbelsdorf in the Hohen Fläming is surrounded by forests and lies between Coswig (Anhalt) and the small town of Niemegk in Brandenburg . The hilly terrain reaches 170 m above sea level near Cobbelsdorf. NN and belongs to the Fläming Nature Park , declared in 2005 . In the north, the district of Cobbelsdorf borders the state of Brandenburg . Lutherstadt Wittenberg is approx. 15 km away.

The place first appeared as Cobstorp in 1356 in a document. The current spelling of the place name slowly developed via Cobsdorf and Kobbelsdorf . For more than 100 years Cobbelsdorf was a desert , only from the middle of the 16th century there are records again. These describe the development from a Vorwerk to a domain in the Duchy of Anhalt-Bernburg , which became part of Anhalt in 1863 .

At the end of the Second World War , there were unnecessary casualties and destruction from skirmishes in Cobbelsdorf when a division of the Waffen SS tried to prevent surrender to the advancing Red Army .

The process of forming agricultural production cooperatives in Cobbelsdorf ended in 1959. The former LPG culture house has since been reconstructed and now houses a potato inn. 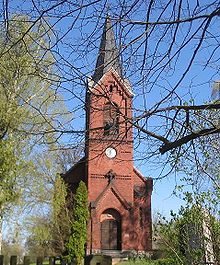 In recent years, among other things, the outdoor swimming pool has been renovated and the through-road (L 122) has been completely rebuilt.

On July 1, 2007, the formerly independent municipality of Cobbelsdorf with its district of Pülzig was incorporated into the Wittenberg district of the former Anhalt-Zerbst district due to a district reform.

Written evidence of the existence of Pülzig is provided by a document from 1224. The place is on the upper reaches of the Grieboer Bach , which flows a few kilometers south in the eponymous place Griebo into the Elbe .

In Pülzig there is the neo-Gothic brick church “St. Jakobus ”, which was erected in 1895/96 in a north-south orientation on the foundations of the previous church. The medieval stone church had been destroyed by lightning down to the surrounding walls. The church is the first church in the Evangelical Church of Anhalt to be equipped with a solar energy system. The solar module is located on the church tower window above the clock and was installed in December 2005. The bronze church bell with a diameter of 90 cm dates from 1624 and was cast by H. Michaelis from Magdeburg . The single manual organ (approx. 1890) was made by the Zörbig master organ builder Wilhelm Rühlmann . The simple furnishings of the church are almost unchanged from the time it was built.

Agriculture is the largest employer in town. A potato trading company is active here in this traditional potato growing area (founded in 1992).

In the district of the neighboring town of Köselitz is the motorway connection of the same name to the A 9 ( Berlin - Munich ) and the connection to the federal highway 107 ( Coswig (Anhalt) - Wiesenburg / Mark ). The nearest train station is in the town of Coswig (Anhalt), ten kilometers away ( Dessau-Roßlau - Wittenberg line ).