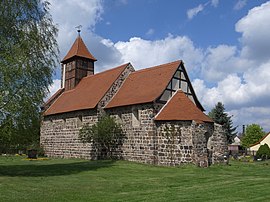 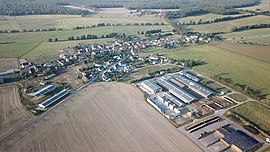 Aerial photo from August 22, 2019 - the former district of Krakow can be seen in the background.

Ragösen is a district of the town of Coswig (Anhalt) in the district of Wittenberg in Saxony-Anhalt .

Ragösen on the southwestern edge of the Fläming lies in the valley of the upper Nuthe . This small river has its source about five kilometers northeast of the town, flows through Zerbst and flows into the Elbe at Barby . The area is very wooded, the terrain is characterized by rolling hills. The vineyard in the extensive forest area three kilometers north of Ragösen reaches 136 m above sea level. NHN .

The closest cities are Dessau-Roßlau , Coswig (Anhalt) and Zerbst .

On July 1, 1950, the previously independent municipality of Krakow was incorporated.

On July 1, 2007, the former municipality of Ragösen was incorporated into the Wittenberg district due to a district reform from the former Anhalt-Zerbst district.

The state road 121 (formerly federal road 187a ) from Zerbst to Coswig (Anhalt) leads through Ragösen. In the neighboring village of Jeber-Bergfrieden there is a rail connection ( Dessau-Roßlau - Potsdam - Berlin route ) ( Kanonenbahn ). The motorway connections “Köselitz” and “Coswig” on the A 9 (Berlin – Munich) are 16 and 20 km away .