This article covers the district of Coswig. See also: Ziekow or Ziko .

Zieko has been part of the town of Coswig (Anhalt) in the district of Wittenberg , Saxony-Anhalt (Germany) since January 1st, 2004 . With the regional reform of 2007 in Saxony-Anhalt, Coswig belongs to the Wittenberg district from July 1, 2007. 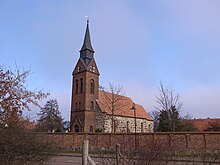 Zieko was first mentioned in 1282 as "cycouwe". It was a Slavic village that already had a fief in 1566. The predominant employment of the village population was agriculture. It is known from the population and livestock censuses that many sheep were kept from the 19th century. Older Zieko citizens still remember the shepherd who existed until the middle of the last century, who collected the animals in the village in the morning and drove them to the drifts. There the animals fattened themselves while grazing on the clover, which grew abundantly, as can be learned from historical sources describing the botany of the surrounding area. Furthermore, several streams converge in Zieko, which results in the shape of a Y-shaped rail. The residents used this to farm fish and operate several mills.

Coat of arms of the district of Zieko

Blazon : "In gold, a blue drawbar, right and left a green clover leaf, below a red fish."

In 2000 the municipal council decided to use a coat of arms that refers to the local conditions. The municipal heraldist Jörg Mantzsch was commissioned with the design . The shaft stripe is represented in the coat of arms by the green shamrocks, fishing by the red fish, while the confluence of the streams is symbolized by the blue drawbar.

Graves in the cemetery commemorate two Polish and one Ukrainian citizens who were deported to Germany during the Second World War and were victims of forced labor .