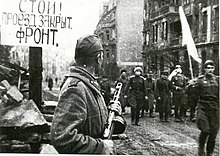 German parliamentarians after the battle for Breslau (1945)

A truce is a negotiator between war leading parties. The status of a parliamentary is regulated in the third chapter (Articles 32 to 34) of the Hague Land Warfare Regulations. According to this, the parliamentarian enjoys inviolability under international law .

According to Article 32, only the authorized negotiator himself is referred to as a parliamentarian who has to show himself with the parliamentary flag - the so-called "white flag". However, their accompaniment in the form of standard-bearers, interpreters and trumpeters, horn players or drummers is also protected.

Article 33 describes the rights of the opposing party to which the parliamentarian is sent. So there is no duty to receive it. The opponent is also allowed to detain the parliamentarian or to take other measures so that no secret information is passed on to the enemy through him.

According to Article 34, parliamentarians lose their inviolability if they abuse their position to commit treason .

Wikisource: Agreement on the Laws and Customs of Land War. July 29, 1899.  - Sources and full texts