Griebo is a village and part of Lutherstadt Wittenberg in Saxony-Anhalt .

Griebo is located in the Fläming Nature Park at the mouth of the Grieboer Bach in the Elbe (the brook originates in Fläming in the north in the Cobbelsdorf district ). The town of Coswig (Anhalt) is in the immediate vicinity to the west, and the Apollensdorf district of Wittenberg borders Griebo to the east .

In 1201 Griebo appears for the first time in a document. The late Romanesque St. John's Church in the town dates from this time and was used as a fortified church , especially around the Thirty Years War , as Griebo was on a military road and was often looted.

In 1936 the prisoner camp “Elbe regulation Post Griebo bei Coswig (Anhalt)” was set up for 400 prisoners. This also included 150 prisoners who were housed on a barge named "Biber". The economic purpose was the dredging of gravel from the river bed of the Elbe. This should deepen the river bed and thus improve inland navigation. From 1939 the prisoner camp of Dessau-Roßlau also belonged to the Elbe regulation camp in Griebo . Overall, these sub-camps belonged to the Elbe regulation camp Griebo:

In 1944 three female prisoners were also interned in the camp. One of these women was Irene Seiler , who had been sentenced to several years in prison for “ racial disgrace ”.

On January 1, 2008, the community of Griebo was incorporated into Lutherstadt Wittenberg.

Blazon : "In blue a silver heron with a golden beak and legs, standing on one leg, the other raised."

The coat of arms was designed in 2001 by the Magdeburg municipal heraldist Jörg Mantzsch and included in the approval process. 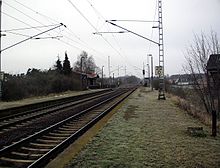 The railway line Węgliniec – Roßlau has a stop in Griebo. From Griebo there are trains every hour from DB Regio to Dessau-Roßlau and further in the direction of Halle (Saale) or Leipzig and in the opposite direction to Lutherstadt Wittenberg - Falkenberg (Elster) .

The public transport is carried out by the bus company Vetter GmbH with a connection from the Wittenberg district of Apollensdorf via Griebo to Coswig (Anhalt). This is partly done in the dial-a-bus procedure . There is also a bus line from Wittenberg via Griebo and Coswig (Anhalt) to Roßlau.