A surfboard is a board made of a buoyant material that is used as a sports device for surfing or, in conjunction with a sail, for windsurfing .

The core material in surfboards is hard foam. The coating is usually made of polyester or epoxy resin- soaked fiberglass fabric . Modern surfboards use a core that contains a helium-filled bladder in the middle, which further reduces the weight of the surfboards and increases buoyancy. Occasionally surfboards are also made from balsa wood . If additionally provided with a polystyrene core , these are lighter than conventionally manufactured boards. There are also surfboards made of wood that are hollow on the inside - comparable to an airplane wing in terms of their construction.

In order to ensure the longitudinal stability, a thin sheet of plywood is installed in the middle in the longitudinal direction , the stringer . It balances the load distribution so that the board does not break apart.

There are different designs depending on the application. These determine the turning behavior, buoyancy and manageability, and ultimately the use of the board.

The size of a surfboard is usually in Feet (ft) and inches indicated (inches), windsurfing and centimeters are common. A characteristic of windsurfing boards is the volume given in liters , which determines the static buoyancy .

The fin is screwed into the fin box in the rear of the board and is used for directional stability. There are different standards for the fin box in windsurfing: Powerbox, US-Box, Tuttle Box, deep Tuttle Box, Powertrim Box, Tiga Conic Box. Surfing and windsurfing wave boards often have two or three fins.

Longboard class windsurf boards and beginner boards have a moveable sword near the center of the board. A rail for attaching the mast foot is integrated into a windsurf board. This serves to hold the power joint and thus the mast base and can be adjusted lengthways depending on the size of the sail.

The foot straps on windsurfing boards, at least two at the front and one or two at the back, are adjustable for each foot size and can usually also be moved on the board.

Windsurf boards are called after their different areas of application:

In contrast to windsurfing boards, surfboards for surfing do not have foot straps. To increase the stability on the wet surface, the market offers various surf waxes , which are applied to the surface of the surfboard. Depending on the water temperature, there are different types with the names Cold (up to 14 ° C), Cool (13 to 20 ° C), Warm (19 to 26 ° C) and Tropic (from 24 ° C water temperature).

When it comes to surfing, there are basically two different types of boards: the longboard and the shortboard .

Each type of board has special properties in terms of buoyancy, stability, maneuverability and speed of the surfboard. A longboard is used when the length exceeds 8 feet (about 2.44 meters). Shorter surfboards are known as shortboards. 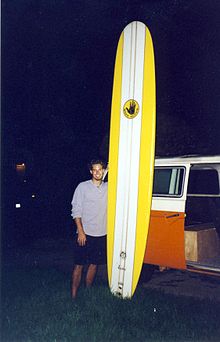 On the longboard, those under 9 feet (approx. 2.74 meters) are also often referred to as Malibu . Longboards are usually relatively thick and have a rounded tip, also called a nose . Beginners and slightly advanced riders should use the Malibu (Funboard), which is the easiest to “catch” the wave and maintain balance.

Historically, longboards were only surfed until the 1960s, which is why longboard surfing is considered old school and is usually done with a sense of style. The longboard's most popular trick is the hang ten , also known as the nose ride , with all ten toes sticking out over the top of the board. Well-known longboarders are Joel Tudor from the USA and Bonga Perkins from Hawaii .

Due to its relatively difficult handling, the shortboard is more suitable for the advanced surfer. Here, too, the different designs determine the different properties of the boards.

A special form of form boards category Gun ( gun ) having a length of 7 feet to about 12 feet. They are very slim and tapered at the front and are used for very large waves. The small width allows high speeds, and because of their length they are more stable in the water even at high speeds. 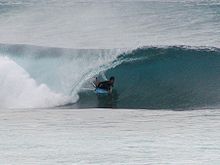 Bodyboarder in a tube

A bodyboard (or boogie board ) is a special type of surfboard for surfing. In contrast to the surfboard, which is used standing, you surf on a bodyboard lying down. With the drop knee variant, you kneel with one leg on the board while the other is upright. People rarely stand on the bodyboard entirely. The advantages of bodyboards are that they are easy to learn, easy to transport and the relatively low risk of injury from the board itself.

There are simple beginner boards for children through to professional boards that cost up to 400 euros. A bodyboard consists of foam or hard foam such as polyethylene or polypropylene . Depending on the version, a stringer made of carbon fiber reinforced plastic is inserted for reinforcement, similar to the surfboard . For beginners, a board is suitable that extends in length from the floor to just below the navel and, when held in the hand, fits comfortably under the crook of the arm. The board is connected to the body by means of a leash - a suspension line. The leash is usually attached to the forearm or upper arm with a Velcro fastener. For bodyboarding, you need special, short swim fins that are available in surf shops. These fins are moved with short, powerful strokes to reach the wave. Tennis socks that are worn in the foot section are an insider trick for the initially uncomfortable but indispensable swim fins for body surfing.

The bodyboard can be used in almost all waves from 0.5 to 8 meters. It is particularly suitable for steep beach and reef breaks with rapidly breaking waves, such as those found on B. occur in Puerto Escondido in Mexico . In Germany, the North Sea on Sylt near Westerland and Wenningstedt is best for bodyboarding. Bodyboard equipment is also available in Westerland. Other popular bodyboarding areas in Europe are Peniche and Ericeira in Portugal and the north coasts of Lanzarote and Fuerteventura , as well as the Atlantic coast of France . In Portugal and large parts of Latin America , the bodyboard is much more popular than the surfboard.

This board shape was invented by Tom Morey in the 1970s, who with his company morey-boogie had a patent on it for 25 years. There are now numerous other manufacturers on the market.

A well-known bodyboarding protagonist in the scene is the Hawaiian Mike Stewart, who lived in Tom Morey's neighborhood as a boy. He won a total of 11 world titles in bodyboarding. He was considered one of the best surfers in the early 1990s, regardless of equipment, and is still winning competitions today at the age of 42. A younger generation around the 2006 world champion, Jeff Hubbard, focuses on aerials (air jumps), with rotations of up to 720 degrees in the air.