The fin is part of the equipment in water sports , but unlike the oar, it is fixed. Usually it is mounted on the stern and serves to maintain directional stability, similar to the fin on fish or the tail unit on aircraft. With surfboards , for example, the sailing forces are converted into propulsion with the help of a fin. With kayaks also is for Finn English expression skeg related. When it comes to dinghies , one speaks of a movable sword , which instead of a keel reduces drift.

In windsurfing , the fin size used depends on body weight, board size , sail size and strength of the wind. A fin that is too small or too heavily loaded after jumps, for example, leads to a spin out during windsurfing, with the effect that the surfboard loses its stability in the direction of travel and suddenly slips sideways.

On the other hand, a fin with too much area or - worse still - too much draft means that the board reacts slowly to the controls or lifts the windward edge out of the water at high speeds to overturn.

In general, however, smaller fins should be ridden in order to have a smooth, lively board (wave riding and freestyle). Larger fins are preferred by slalom and race drivers. And because it is easier to run altitude with it, even for slightly advanced windsurfers.

When surfing , the fin size depends on the number of fins used, the body weight of the surfer, the wave size and the strength of the wave. Larger fins offer more stability under high loads from heavy surfers and high speeds, smaller fins are more agile. Between one and four fins are used when surfing.

When windsurfing usually only one fin is used. In special situations, two fins of the same size are attached next to each other on a surfboard, so-called twinsers (increases maneuverability or allows greater sailing forces in shallow water). Or there are two smaller fins to the left and right of the central fin, so-called thrusters (e.g. for surfing in high waves, in order to still grip on a heavily edged board). In areas with seagrass or when the water is shallow, special seagrass fins are used for windsurfing, which are very strongly bent backwards in order to still offer a large area when the fin height is low.

When surfing , different fin configurations ( setups ) are used depending on the board class and area of ​​application :

The straight fin, which is placed parallel to the long axis of the surfboard, is the fastest configuration when driving straight ahead. It needs a lot of fin surface to offer sufficient stability and is therefore not particularly agile.

The (engl. For long surfboards Longboards ) most commonly employed configuration composed of a large middle fin and two small obliquely side fins. This achieves better board control and stability than with the single fin setup.

With this configuration you get very fast and agile surfboards that offer more stability than surfboards with a single fin setup. This setup is more likely to be used in smaller waves.

The case of short surfboards (Engl. Shortboards ) most commonly used configuration offers a good combination between stability and maneuverability. The three fins are usually the same size. Surfboards as they are surfed in competitions are mostly equipped with this configuration. The rear fin is in the middle and parallel to the longitudinal axis of the surfboard, the side fins are inclined.

This configuration is a little faster in a straight line than surfboards with the thruster setup, but just as agile in the corners. The front fins are larger than the rear fins. All fins are inclined at a slight angle.

The fin is screwed into a groove on the underside of the surfboard , the so-called fin box (English box or plugs ), or is firmly connected to the surfboard. There are the following relevant systems for this: 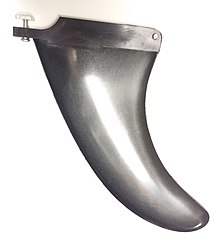 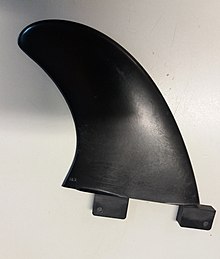 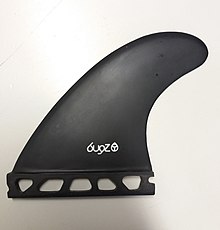