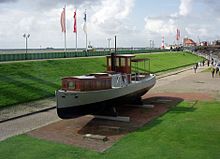 Concrete ship Treue at the Schlachte in Bremen

A concrete ship is a ship with a hull made of concrete that is stiffened with steel or other tensile reinforcement inserts.

The building material concrete is inexpensive and the amount of reinforcement steel is less than in a ship that is made entirely of steel. One-offs are complex, whereas the use of concrete formwork enables cost-saving series production. Furthermore, concrete is very resistant. Damage from wood pests, for example, is eliminated, and the adhesion of algae and marine animals is minimal compared to other shipbuilding materials. Maintenance and repair costs are lower than for conventional ships.

Disadvantages are the required large wall thicknesses and the resulting large weight (mass) of larger ships, which have a negative effect on the operating costs, the load-bearing capacity for the same size and the maneuverability . In conventional shipbuilding, steel, wood or plastics are usually used. The building material concrete is uncommon in this area. Advances in materials research enable the use of concrete and reinforcement material with improved properties, particularly with regard to weight and flexibility.

The first vehicle in reinforced concrete was manufactured as a boat by Joseph-Louis Lambot in 1848 and shown at the World Exhibition in Paris in 1855 . Around 1860, concrete barges for canal navigation were built in the Netherlands. In Italy, Carlo Gabellini began building smaller ships made of reinforced concrete around 1860. The most famous of his ships was the Liguria .

In times when steel was scarce , the idea of making ships out of reinforced concrete (and especially ferrocement) was used. Friedrich Achenbach and Gottfried Feder were pioneers in German concrete shipbuilding . Around the period from 1916 to 1918, the cargo ship building, which was heavily demanded by the war-related losses, attempted to use reinforced concrete merchant ships, which were also built and used a few years later. Due to the design, which was based too much on the conventional frame construction , there was still no series production. The ships were difficult to maneuver and also showed poor sea characteristics. Concrete barges were built on the Danube during the First World War and afterwards by the construction company Wayss & Freytag . In America, too, a number of concrete ships were built during this time, in 1917 the Namsenfjord was built as the first sea-going concrete ship, and in 1918 the Faith .

In 1921 the concrete motor tractor Paul Kossel was built due to the steel shortage .

During the Second World War , concrete ships were built again. By using the shell construction , which is cheaper for concrete , these vehicles could be mass-produced economically from around 1940. Four basic types were planned: lighter for inland navigation, tankers, freighters and coasters. Steel savings of up to 70% could be achieved, which also reduced the susceptibility to mines with magneto ignition. The construction company DYWIDAG (Dyckerhoff & Widmann) manufactured a large part of the hulls in cooperation with various shipyards (the number is unclear; at least 50 pieces, estimates go up to 200 pieces). Ulrich Finsterwalder promoted the development of the shell construction .

Concrete shipbuilding was also intensified by the USA during World War II. Only some of these ships (FCB Ferroconcrete Barge, LST Landing Ship Tank) were used. Others were used in American commercial shipping after the war . Ten of these ships, including the USS Quartz (IX-150) , which was used in the atomic bomb test Operation Crossroads , were still in use as breakwaters in Canada in 2015 (Lage) . 49.865236 -124.55576

As part of a project sponsored by the USA, a prototype for patrol boats of the Swift PCF-2 type was manufactured in concrete in the Philippines and in South Vietnam in 1969 . The Vietnamese Navy had 71 Yabuta- type concrete junks in use. Mid-1970s, a seaworthy was LNG - tankers developed, but it never came to production.

Due to the long service life of the hulls, there are still quite a few older ships in use.

Ships or boats are still built in reinforced concrete and concrete boat building competitions are held among students .