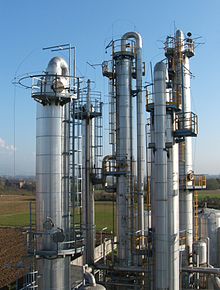 Examples are the CO 2 fraction in the exhaled air, the O 2 fraction of the inhaled air (FiO 2 , → ventilation ), the light oil fraction of petroleum , in biochemistry the protein fraction of milk or organelle fractions in the processing of biological tissues as well as soluble proteins on the one hand and insoluble membrane fractions on the other hand in the subfractionation of organelles (or in general membrane systems ).

The thin layer chromatography is an alternative method for the analytical separation of very small amounts of a substance mixture. In macromolecular chemistry, the separation of polymers with different degrees of polymerization into fractions of approximately uniform molecular mass plays a role.

In preparative separation (fractionation), a mixture of substances in considerable quantities (typically several mg , g , kg or to ) by fractional distillation (example: separation of petroleum into petroleum fractions such as petrol , diesel fuel , heating oil , base oils for lubricants , bitumen ), fractional Crystallization (separation of solid mixtures) or separated by column chromatography (often in the organic-chemical laboratory, less often in technology).