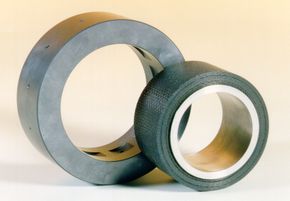 Components of a hydrostatic plain bearing.
Image: MT Aerospace AG, Augsburg. The picture shows the lubricant pockets on the inside of the bearing bush, which continuously supply the bearing gap with lubricant through radial bores. It is a ceramic bearing with a silicon carbide bush . A sleeve made of fiber-reinforced ceramic is shrunk onto the rotating shaft side as a friction partner.

A hydrostatic plain bearing is a bearing that is often used in mechanical engineering . It is characterized by an active lubricant circuit, which is maintained by an external pump and which is guided through the bearing gap.

The function is based on the fact that by means of an external pressure supply ( pump or gas pressure container) the liquid or gaseous ( air bearing ) lubricant is continuously pressed at constant pressure via inlet channels into chambers (lubricant pockets) between the bearing surfaces and these are always separated from one another by a thin film of lubricant .

As a result, friction loss occurs only through the shear forces of the liquid, which are proportional to the speed at which the bearing surfaces move against each other. The coefficient of friction is therefore very low. In the limit of vanishing relative speed, hydrostatic bearings therefore run practically without friction; a stick-slip phenomenon does not occur, since no direct contact between the bearing surfaces occurs. This enables highly precise position controls in the sub-micrometer range.

In contrast to the hydrodynamic sliding bearing , the sliding resistance caused by mixed friction during start-up and stopping, which is associated with increased wear of the bearing, is eliminated . The elimination of the sliding resistance also leads to the avoidance of the stick-slip effect (tear-away effect), which leads to increased deviations in the case of highly precise positioning movements. Another advantage is the very good damping properties of hydrostatic bearings.

The main areas of application for hydrostatic plain bearings, which can be built as linear or rotary bearings ( axial or radial bearings ), are high-precision measuring and machine tools or turbine or generator bearings in power plants .

The first generation was air-bearing in historical dental turbines . The air flow surrounding the turbine wheel held it in place.

As works of art there are fountains with a stone ball sliding on a film of water . The first spherical fountain of this type was created in 1983 by Christian Tobin (still as Christian Mayer) for Munich's Westpark .