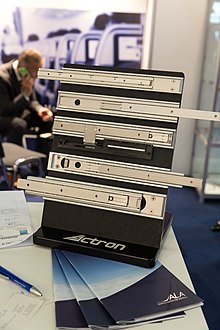 Linear ball bearings or linear bearings for short , also known colloquially as ball bushings or ball bushings , are special ball bearings with an unusual, because axial (instead of radial) ball circulation. The purpose of this bearing is not (as with all other roller bearings ) to support a rotating element, but rather to guide the translational, ie straight-line movement of a machine element along a cylindrical shaft with as little friction as possible . This creates one of several types of special linear guide , the so-called wave guide . A distinction between fixed and floating bearings , as is common with roller bearings, is therefore meaningless for linear ball bearings.

With these linear systems without stroke limitation, there is point contact between the bearing balls of the bearing and the shaft. The permissible load capacity of a linear ball bearing depends on the number of load-bearing rows of balls. Earlier linear ball bearings were made of high-carbon roller bearing steel that was ground inside and outside after hardening .

An outer ring but have today linear bearing several raceway plates on the outside diameter on which (per recirculating ball a) that the bearing balls roll in linear bearings. The raceway plates of modern linear bearings sit in a plastic housing, which also serves as a ball cage and takes on the function of the ball return . Instead of an inner ring, the balls run on the inside directly on a shaft made of precision steel . This type of construction has now almost completely replaced the all-steel design that was common in the past.

Linear bearings are available both with and without seals on one or both sides on the end faces.

During the axial ball bearing in the linear ball bearing, only the inner, carrying ball row is always charged while the outer, relieved to ball row opposite to the bearing direction of movement through a ball return and the ball return back to the second ball return to the starting point of the load zone is moving.

Similar to roller bearings, linear ball bearings are offered standardized in various dimensions. Various ISO series (e.g. ISO series 1 or ISO series 3) define the exact inside and outside diameters as well as the lengths of these bearings.

Usually linear ball bearing sizes are defined according to the inside diameter. (Nominal diameter)

In the list of DIN standards, the DIN 636 and DIN 644 standards include linear rolling bearings, including, according to the DIN definition, not only linear ball bearings, but also

Use of linear ball bearings

Furthermore, linear ball bearings can be used to set up linear tables and other displacement devices. For example, on the foot under the armchairs in the front rows in the plenary hall of the German Bundestag there are corresponding sliding units based on linear ball bearings that enable the members of the parliament sitting there to move back and forth in their armchairs.

Manufacturers of linear ball bearings include a. large industrial groups in the rolling bearing and mechanical engineering industries producing in Germany such as Bosch Rexroth , the Schaeffler Group (INA, FAG) or Ewellix , as well as various medium-sized and smaller companies from the European, American and Asian regions.