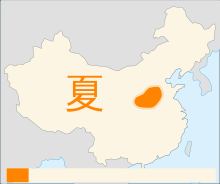 The Xia dynasty ( Chinese  夏朝 , Pinyin Xiàcháo , W.-G. Hsia-ch'ao ) is the first dynasty in Chinese history according to later tradition . It existed, depending on the assumed chronology, possibly between approx. 2200 and approx. 1800 BC. BC, or between 2000 and 1600 BC The names of 17 kings from 13 generations have been handed down. The Xia dynasty, whose existence was disputed, was followed by the Shang dynasty , for which there is also written evidence.

The actual existence of a central state authority under the Xia dynasty is still doubted by many historians, especially Western historians. Above all, they criticize the lack of convincing contemporary artifacts , while the first written reports about the Xia dynasty are only available more than 1000 years after current events, so that one can hardly differentiate between myth and reality.

However, many Chinese historians and archaeologists assume that the historical record is at its core the reality. Above all, rich settlement remains from the early Bronze Age near Anyang in Henan Province , which were discovered in 1928, are interpreted as a capital of the Xia. Local researchers therefore see this dynasty as part of the Erlitou culture . In the 1960s and 1970s in particular, several Bronze Age settlements and graves were discovered and excavated in the area that historical tradition claims to be part of the Xia area, indicating the existence of a unified state. Since no written documents have been left from the Xia period, interpreting the excavations in terms of the existence of a central government remained difficult.

Recent research has dealt with the flood myth, in which the hero Yu is said to have distinguished himself , whereby he was chosen to be ruler. According to the reconstruction of the event, it is the largest freshwater flood that has ever been documented.

According to the researchers, it was around 1922 ± 28 BC. An earthquake that originated from the eastern Tibet Plateau and caused a landslide in the Jishi Gorge in Qinghai Province, in which 40-80 million cubic meters of rock slid off and caused a large flood, creating the Qijia culture on the upper Yellow River was destroyed. The Lajia site documents this destruction.

At the same time, several dams can be identified on the middle Yellow River, which protected the structures of the Erlitou culture and tamed the river. Such a construction program indicates a central organization. Thus, the researchers around David J. Cohen came to the conclusion that the early Erlitou culture (dated from 1900 to 1500 BC) actually represented the Xia dynasty of the first ruler Yu, who lived around 1920 BC. BC is said to have laid the dynastic foundation stone of early China.

According to the description in ancient texts, the territory of the Xia extended to the east to the borders between the present-day provinces of Henan , Hebei and Shandong , to the south to Hubei , to the west to the southern part of Henan and to the north to Hebei. It was concentrated in the middle course of the Yellow River and partially extended as far as the Yangtze River . Their capital has been relocated several times, with at least one of the places described near the city of Anyang in Henan Province can be considered a relatively large contemporary settlement.

So far nothing is known about the life, the organization, the daily routine of the people of that time. The ancient texts are limited to lists of events in the royal family. The evaluations of the excavations are not very far advanced.

Eggshell ceramic cup from the Longshan culture , in 1976 Chengziya-site in Shandong discovered

Agriculture was already practiced intensively in the Xia period. According to legend, alcoholic beverages were also brewed at this time. In order to increase the production of agriculture, the first calendars were made. In ancient texts, the origin of the traditional Chinese calendar was traced back to the calendar system of the Xia period.

There were probably already differentiated trades for clay and bronze processing.

The following outline of the events comes, as mentioned above, from documents that came into being much later. Their accuracy and truthfulness can hardly be checked.

The founder of the Xia dynasty was King Yu . Before Yu, the title of king was not passed on dynastically. The new king was appointed by the old king and confirmed by the tribes. King Yu excelled in fighting a major flood, gaining the trust of ancient King Shun and the tribes. After Yu's death, however, his son Qǐ had himself proclaimed king, thus overriding the old recommendation system. This aroused resistance among the tribes, which Qǐ was able to put down militarily. He then had the tribal chiefs gathered to confirm his new dynastic system.

After Qi's death, his son Tài Kāng became king. Since Tài Kāng led a very luxurious life and neglected state business, his title of king was contested by his five brothers. Finally, his brother Zhong Kang won the title for himself. (There are also sources according to which Zhòng Kāng is a son of Tài Kāng.) However, the fratricidal struggle had weakened the Xia house, so that Zhong Kāng's son Xiāng could be ousted by a usurper . Only Xiāng's son Shǎo Kāng was able to put down the rebellion and restore the dynasty. Shǎo Kāng's son Zhù was able to successfully and permanently strengthen the dynasty again. At the end of the dynasty, however, from King Kǒng Jiǎ , the dynasty was weakened again by internal struggles.

The last Xia king, Jié , has been described as particularly brutal. His tyranny deprived the Xia dynasty of all support from the population and in the tribes, so that the leader Tāng of the Shang tribe was able to pull into a rebellion and thus ended the Xia dynasty. To this day, the name Jie in China is synonymous with tyranny and tyranny.

Ruler of the Xia Dynasty

* The traditional reigns come from ancient Chinese historians and are considered out of date, even in the event that these rulers actually existed. The modern Xia-Shang-Zhou Chronological Project set the beginning of the Xia Dynasty at around 2070 BC, more than a century later. However, these and other provisions of the PRC are controversial in the international research community.

On the difficulty of dating the Xia dynasty see: