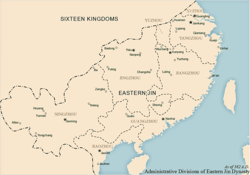 The Eastern Jin Dynasty lasted for a total of 104 years with a total of 11 emperors , isolated in southern China (which was then still considered the edge of the Chinese Empire). In the end, the dynasty was badly shaken by a series of internal unrest, whereby a member of a powerful family on which the emperor ultimately relied was able to take the opportunity to force the emperor to abdicate and thus end the Jin dynasty.

Establishment of the dynasty and the tension between the powerful families

As the end of the Western Jin Dynasty loomed, some members of the imperial family began to prepare for a relocation of the capital. Sima Rui was a king at the time, but enjoyed little respect among the imperial family and the rest of the powerful families of the time. However, when the penultimate Western Jin Emperor was captured by the southern Xiongnu under Liu Cong in 311 , the gravity of the situation became apparent. Sima Rui took action and actively prepared Nanjing as a haven for the dynasty. His efforts gradually gained recognition. By the time the last Western Jin Emperor fell in 316, he was already supported by almost every major family in the empire. That same year he assumed the title of King of Jin, and the next year he was proclaimed the new Jin Emperor.

The capital of the new Jin Empire was Nanjing. Up until this point in time, the area south of the Yangtze River was still considered the border area of ​​the empire. The relocation of the capital to Nanjing meant a considerable upgrade for the region. Many powerful families moved to the new capital. The occupation by the Huns and the warlike turmoil that followed drove many people from the rest of the population to this region. As once the settlement of the Huns in central China, this huge population migration also had two effects: the economic and cultural revitalization of the region as well as conflicts between immigrants and locals. Above all, the local population, from the powerful families to the common people, felt disadvantaged in everything. Even within the immigrant community, conflicts arose between those who had immigrated south before the establishment of the Eastern Dynasty and those who had only followed suit.

In addition, Sima Rui first needed the support of powerful families to secure his power. This dependence made the emperor's position particularly weak. The disputes between the large families were also disputes over central power. The conflicts often degenerated into armed clashes. Particularly in the early stages of the dynasty, the situation was very difficult and unstable. The situation only began to calm down in the course of the rule in the 50s of the 4th century.

A constant in the politics of the Eastern Jin Dynasty was the effort to retake central China. Shortly after the establishment of the dynasty, some families began to prepare for the northern campaigns. The first of these campaigns was carried out as early as 321 and achieved modest success. However, it had to be broken off because the internal conflicts made it impossible to continue the campaign. Soon after, Hanzhao was able to recapture the lost territories. Between 349 and 369, the Eastern Jin Dynasty waged another five campaigns. Although some of them initially turned out promising and even the ancient capital Luoyang could be conquered, they all ultimately remained unsuccessful.

There were many reasons for the failure of these campaigns. Internal conflicts had repeatedly thwarted plans for foreign military undertakings. Many of these campaigns were initiated by individual military governors and were uncoordinated. There were always problems with logistics and supplies. The emperor's distrust of his generals, who became too powerful for him, did the rest.

The relatively weak imperial family and the strong, influential family clans, paired with very powerful governors who possessed military power and could also take the initiative to campaign, were another problem of the Eastern Jin Dynasty, which reached threatening proportions towards the end. So these local princes became de facto independent, while the imperial family could only exercise direct control over eight prefects near the capital.

In 382, ​​the Emperor of the Former Qin Fu Jian ( 符堅  /  苻 坚 ) united large parts of northern China and prepared to attack the Eastern Jin. Although the majority of his advisors were against it, Fu ignored their warnings. In September 383 he left Chang'an . His army comprised 600,000 foot soldiers and 270,000 horsemen. Fu was convinced that the south had nothing to oppose his vast army. He had even made up the title of Jin Emperor after his surrender. In fact, Jin could only muster 80,000 defenders. Although heavily outnumbered, Jin Army General Xie Shi ( 謝 石  /  谢 石 ) decided to take the initiative. In a night-and-fog operation, a small unit of the Jin with 5,000 men was able to destroy the outnumbered vanguard of Fu Jian. The catastrophic defeat deeply unsettled the army of Fu Jian and encouraged his opponent. Eventually, the main forces met on the Feishui River in what is now Anhui Province . Only the river separated the opponents.

The Jin Army asked Fu Jian to pull his troops away from the river so they could cross the river to fight the decisive battle. Fu Jian saw this as a good opportunity, as he intended to attack the Jin Army while they were still crossing the river. However, the withdrawal was unprepared and disorderly, so that the order of battle of Fu Jian itself was shaken. Meanwhile, the soldiers who had previously surrendered to his forces during Fu Jian's advance south and then integrated into Fu Jian's army shouted that the battle was lost. The chaos of retreat turned into panic. Fu Jian's vast army was defeated before any real contact with the enemy was made. Meanwhile, the Jin Army's vanguard with 8,000 men crossed the river and stormed the field. Fu Jian was severed from his bodyguard and hit by an arrow. When he was able to gather his remaining army north of the Huai River , he was left with only 10,000 men. He died two years later and the former Qin fell apart again.

The Battle of Feishui is considered to be one of the most important battles in Chinese history. It has always been seen as an example of how an outnumbered army can defeat a supposedly much stronger enemy. It also sealed the division of China into a northern and a southern empire for another 200 years.

The fall of the Eastern Jin Dynasty

After successfully defending against the threat from the north, the Jin dynasty returned to its usual inner turmoil. The successful minister Xie An ( 謝 安  /  谢 安 ), whose brother had commanded the army in the Battle of Feishui, was suspected by the emperor and sent into exile. The power struggles between different blocs and families degenerated into civil wars. Various local princes had de facto withdrawn from the central government and were now only nominally subservient to the central government. Even the tax revenues in their areas were no longer passed on to the central government, so that ultimately the entire state expenditure was based on revenues from a total of only eight prefectures, which corresponded to today's provinces of Jiangsu south of the Yantsekiang and Zhejiang . The tax burden and labor burden for the population were enormous. There were reports from the time that people mutilated themselves in order to be freed from forced labor.

In the spring of 402, one of these prefects rebelled and occupied the capital. He was proclaimed Emperor of Chu. A year or two later, he was beaten by another Prefect Liu Yu (刘裕). Liu had the Jin imperial house rebuilt, but controlled the entire government and the emperor himself. Finally, in 420 , Liu saw his government sufficiently consolidated. He deposed the last Jin Emperor and proclaimed himself Emperor of the Former Song Dynasty .