Shu Han state called itself just Shu ; the attribute Han indicates that it is the successor state Shu following the Han dynasty , since the state founder Liu Bei was related to the imperial family of the Han dynasty and saw himself as a successor. Shu Han was the second of a total of four states called Shu on roughly the same territory. The next, i.e. third, is called the Early Shu Empire this morning and was renamed “Han” in 917/918.

The founder of the Shu Han dynasty Liu Bei claimed that he was a relative of the Han imperial family . Although the last Han emperor confirmed this relationship, there is still a doubt as to whether this was due to power-political calculations. The fact is that Liu Bei came from a very humble background. If his ancestor was actually a Han emperor, the family had long since lost all of their noble privileges. Liu Bei distinguished himself and gained recognition through his participation in the fight against the uprising of the Yellow Turban . In the civil war after the suppression of the uprising, Liu Bei was only able to build up his own power base very late. With the help of his advisor Zhuge Liang , he was able to build an alliance with Sun Quan and stop the expansion of Cao Cao in the Battle of Chibi . Then he gained the area of ​​today's provinces of Hunan , Hubei and Sichuan, where he lost Hunan and Hubei again to Sun Quan.

When the last Han emperor officially abdicated in 220 and the Wei dynasty established itself in northern China, Liu Bei, as a relative of the imperial family, felt called to continue Han and to recapture the lost land. In 221 he proclaimed himself emperor and took the name of his state as Han. Since there were various Han dynasties in Chinese history, this state is now commonly referred to as Shu Han (after the location of the state, Shu is another name for Sichuan).

Sichuan is in the interior of China and is separated from the rest of the country by mountains that are difficult to climb. The center of the province, however, is formed by a fertile basin landscape, which is an ideal retreat for a separate government.

In the second year after the founding of the state, Liu Bei led almost all of his armies in an expedition against the state of Sun Quans in order to recapture the lost provinces of Hunan and Hubei. The campaign ended catastrophically. Liu Bei died in 223 on the way to his capital, whereupon his son Liu Shan became emperor. Zhuge Liang was hired by Liu Bei to assist his son in all matters.

The campaigns of Zhuge Liang 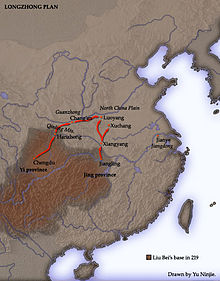 Zhuge Liang's "Longzhong Plan" for the conquest of the north (schematic representation).

Zhuge Liang was driven by a mission to recapture China for the Han family. However, his expeditions first led to the southwest, into the jungle of what is now Yunnan Province . The area to the west and south of Sichuan was considered a barbaric area that was inhabited by the barbarian peoples. Before Zhuge Liang could wage campaigns against the mortal enemy Wei, he had to keep his back clear. The expedition was successful, he was not only able to capture the enemy chief, he was also able to win him over.

After keeping his back clear, Zhuge Liang turned his attention to completing his mission. He tried to invade central China and attack Wei five times in vain.

With these military operations, Shu Han was, although it was economically and militarily the weakest of the three empires, the most militarily active state in China during this period. Historians have very different views on the effect of these operations. Some believe that they represent a serious mistake because they unnecessarily weakened Shu Han and ultimately made it vulnerable to the enemy. Others believe that Zhuge Liang was careful to revitalize the country's economy and build a base. In addition, although he was unable to advance to central China through his expeditions, he always knew how to minimize the losses of his armed forces. He always led his operations offensively, which put the stronger Wei on the defensive and had no time to equip an expedition for the unification of the country himself. Proponents of this thesis argue that it was only after Shu Han stopped these operations that Wei could properly launch an attack on Shu Han.

The conquest of Shu Hans by Wei

After Zhuge Liang's death, his successor Jiang Wei continued to attempt to attack Wei. However, Jiang did not have the authority of Zhuge Liang. He was viewed by many ministers as an upstart and denounced to the emperor. To dispel rumors that he was about to take power, Jiang voluntarily relinquished much of his military power and halted the failures. Wei took advantage of this inner turmoil and attacked Shu Han via a detour via what is now Gansu Province . Here the army passed difficult, but hardly populated terrain unhindered and was able to emerge suddenly behind Shu Han. After the hastily built line of defense was overcome, Emperor Liu Chan surrendered.

Emperor of the Shu Han dynasty