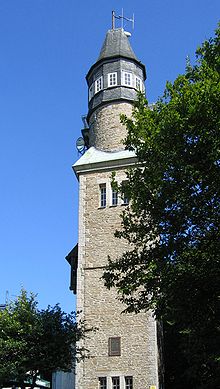 The Iserlohn district was located in the heart of North Rhine-Westphalia on the middle reaches of the Ruhr and lower reaches of the Lenne in the west and the Hönne in the east. The lowest point was 91  m above sea level. NN in the Ruhr valley on the district border in Westhofen , the highest point was the 493.9 m high Rüssenberg in Iserlohn- Kesbern .

The Iserlohn district was founded in 1817 by Prussia in the Arnsberg administrative district of the Westphalia province . It emerged from different historical territories:

The seat of the district was for one year at Melschede Castle near Langscheid . The lord of the castle, Friedrich Freiherr von Wrede zu Melschede, was elected the district's first district administrator on February 19, 1817. After a short time he gave up the office. His successor Peter Eberhard Müllensiefen from Iserlohn was introduced on November 13, 1817. In 1818 the district seat changed to Iserlohn.

The district area initially covered 603 km². The population of 15,129 inhabitants was spread over 179 villages. In 1819 and 1832 several communities were given to the Arnsberg district :

The district council had 20 mandates and was composed of four estates. The Prince of Bentheim-Tecklenburg had one mandate, the manor owners had eleven mandates and the four cities of the district and the representatives of the rural communities each had four mandates. Politics was disproportionately oriented towards the interests of the manor owners. A representation of the municipalities was not possible, the principle of "self-government of the districts" was not clear to the population. The supremacy of the manor owners was only removed with the amendment to the district regulations of July 31, 1886. This enabled the idea of ​​self-administration to be realized.

In the 1830s the district was divided into the five mayorships Ergste, Hemer, Iserlohn, Limburg and Menden. As part of the introduction of the rural community order for the province of Westphalia, the mayor's offices were transferred to offices in 1843 and 1844 , with the cities of Iserlohn and Menden remaining vacant. From that time on, the district initially comprised four offices and a total of 30 communities:

The name of Limburg was changed to Hohenlimburg in 1879 and in 1902 Elsey was incorporated into the city of Hohenlimburg, which at the same time became vacant. Letmathe and Oestrich, the two remaining municipalities of the Limburg office, now formed the Letmathe-Oestrich office . The city of Iserlohn became a district in 1907, but remained a district seat. The Iserlohn district has been called the Iserlohn district since then . Niederhemer and Oberhemer merged in 1910 to form the municipality of Hemer .

In 1922 Letmathe formed its own office and Oestrich formed the new Oestrich office with the municipality of Lössel, which was separated from the office of Hemer . In 1929 the town of Schwerte and the Westhofen office moved from the dissolved Hörde district to the Iserlohn district, and Brockhausen was incorporated into Deilinghofen, Calle to Iserlohn and Landhausen, Sundwig and Westig after Hemer. The Letmathe office was abolished in 1934. In 1936 Hemer and Letmathe were granted city rights, with Hemer now also becoming an office-free city. In the same year Böingsen was renamed Lendringsen .

In 1956 the Oestrich office was dissolved and most of it was added to the town of Letmathe. The rest of the office, including Iserlohner Heide , Gerlingsen , Hombruch and Nussberg, went to the city of Iserlohn. In 1969 Berchum was incorporated into Hohenlimburg. At the same time Evingsen were incorporated into Altena in the Lüdenscheid district and Wimbern to Wickede (Ruhr) in the Soest district .

On October 1, 1969, the district became the Iserlohn district.

The Iserlohn district last consisted of 6 cities and 4 offices with 20 communities. As of December 31, 1972, the district area with a size of 338.63 km² was distributed among the individual communities with a total of 207,158 inhabitants as follows:

1 Cities
2 Official seats
3 Berchum has belonged to the city of Hohenlimburg since 1969, here the numbers according to the old territorial division are in
italics: based on today's urban area

Dissolution of the circle

Results of the district elections from 1946

The list only shows parties and constituencies that received at least two percent of the votes in the respective election.

The federal highways and railway lines as of December 31, 1974 are shown below. 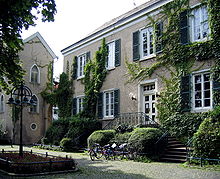 The farmer's church in the Iserlohn old town 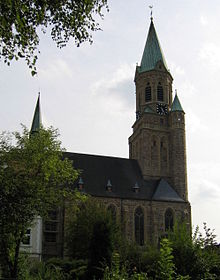 On July 1, 1956, the district was assigned the distinctive sign IS when the vehicle registration number was introduced. It was issued until January 1975 (in January 1975 with the combination IS-MK ).

Counties and city districts in the province of Westphalia