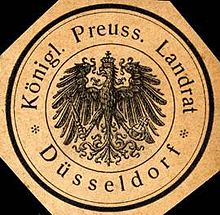 The Duchy of Berg was ceded by the House of Wittelsbach to the House of Bonaparte in December 1805 . Napoleon Bonaparte formed a Grand Duchy of Kleve and Berg with his brother-in-law Joachim Murat as Grand Duke, who took possession of it in March 1806, together with the parts of the Duchy of Kleve on the right bank of the Rhine . In the Grand Duchy, an administrative structure made up of departments , arrondissements , cantons and mayorships (Mairien) was created based on the French model .

Soon after the Battle of the Nations near Leipzig , the Grand Duchy dissolved in November 1813 when all areas up to the Rhine were liberated. Most parts of the country fell to Prussia through the Congress of Vienna . Together with the other parts of the Prussian possessions on the left and right banks of the Rhine, it formed the province of Jülich-Kleve-Berg with the administrative seat of Cologne , which was united on June 22, 1822 with the province of the Grand Duchy of Lower Rhine, also formed in 1815, with its administrative seat in Koblenz to form the Rhine province.

In 1816, the Düsseldorf administrative district was set up and divided into districts. The district of Düsseldorf initially consisted of the nine mayorships of Angermund, Benrath, Eckamp , Gerresheim, Hilden, Hubbelrath , Kaiserswerth, Mintard and Ratingen, which were founded in the French era . On August 16, 1820, the city ​​district of Düsseldorf was also incorporated into the district as the mayor's office in Düsseldorf . Most of the mayor's offices , some of which were also referred to as Sammtgemeinde , were still subdivided into so-called special household communities , the forerunners of the later rural communities.

In 1845, the municipal code for the Rhine Province gave all places that had their own households the status of a municipality. Thereafter, the Düsseldorf district was structured as follows:

In the period that followed, the following changes were made to the administrative structure:

With the law on the municipal reorganization of the Rhenish-Westphalian industrial area , the district was dissolved on August 1, 1929: