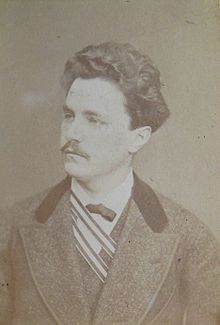 Gustav Ebbinghaus was the son of Iserlohn merchant, factory owner and secret commercial councilor Hugo Ebbinghaus and his wife Louise Sophie nee Kissing. He was married and had a daughter.

Gustav Ebbinghaus attended the secondary school I order in Iserlohn until he was 17 and then passed the Abitur in Arnsberg after a year of preparation. From 1883 to 1886 he studied law at the Ruprecht-Karls-University in Heidelberg and the University of Berlin . In 1883 he became a member of the Corps Guestphalia Heidelberg . After the exams and the doctorate to Dr. iur. he entered the Prussian civil service. In 1903 he became district administrator of the Obertaunus district . In the same year he moved to the Düsseldorf district , where he was district administrator in 1904/05.

From 1907 to 1919 he was curator of the Rheinische Friedrich-Wilhelms-Universität . On the occasion of the inauguration of the new Physics Institute, he was awarded an honorary doctorate from Bonn University in 1913. He was a Privy Councilor and from 1912 to 1921 Senator of the Kaiser Wilhelm Society . Since 1907 he was the patron of the Society for Rhenish History .

From 1913 to 1918 he was a member of the Prussian manor house . At the end of the imperial period ennobled , he no longer carried the title of nobility after 1918th He lived in Munich even before 1930, where he probably died.

See also : List of Corps Students in the Prussian Manor

District administrators in the district of Dusseldorf