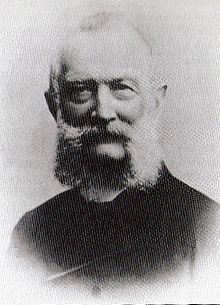 Wilhelm von König studied law in Bonn and embarked on a civil service career. After working as an ausculator from 1855 and as a government trainee at the Wroclaw City Court , he passed the major state examination in 1861 and became a government assessor . He worked for the Opole government and, from 1867, the Lublinitz district office .

On May 7, 1868, Wilhelm von König was appointed District Administrator of the Obertaunus district by the Prussian Ministry of the Interior. He succeeded Constantin von Briesen .

Wilhelm von König was the son of the Prussian Lieutenant Colonel Wilhelm Traugott von König (February 13, 1789 in Lobendorf , † August 25, 1855 in Ratibor ) and his wife Rosine Anna Albertine (called Berta), née Forni (August 3, 1794 in Leobschütz , † May 1, 1847 in Ratibor), whom he married on March 23, 1832 in Gläsen ( Leobschütz district ). The ennoblement of the family found a generation earlier place when William of King's paternal grandfather, Peter King, Lord of praise village and Tornitz in the August 7, 1790 peerage was transferred.