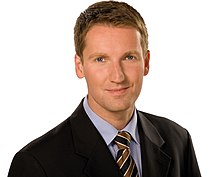 Patrick Ernst Hermann Sensburg (born June 25, 1971 in Paderborn ) is a German CDU politician and professor at the University of Applied Sciences for Public Administration in North Rhine-Westphalia in Münster . He has also been President of the Association of Reservists of the German Armed Forces since November 2019 . He joined the CDU in 1989 after having been a member of the Junge Union since 1986. In 2009 , 2013 and 2017 he won the direct mandate in the Hochsauerlandkreis and is a member of the German Bundestag .

Patrick Sensburg attended the elementary school in Brilon -Gudenhagen and then the Petrinum Brilon grammar school . After graduating from high school in 1991, he did military service and trained as a reserve officer . Sensburg has been a lieutenant colonel in the reserve since 2014 . He then studied law and political science at the Universities of Trier , Luxembourg and Speyer . In 1997 he passed the first state examination in law and the master’s examination in political science. In 1999 he passed his second state examination in law. He was a scholarship holder of the Nikolaus Koch Foundation . In 2003 he was at the University of Hagen for Dr. jur. PhD.

Patrick Sensburg at the University of Vienna (2019)

From 1999 to 2004, Patrick Sensburg was managing director of the German Society for Mediation (DGM), of which he was a member of the executive committee from 2005 to 2019. He has been chairman of the DGM Board of Trustees since 2019. From 2000 to 2006 Sensburg worked as a lawyer specializing in local government and local tax law. Since then he has been a lecturer at the Hagen Law School for the training of specialist lawyers in administrative law. From 2006 to 2007 he was a professor at the Federal University of Applied Sciences for Public Administration - criminal investigation department at the BKA .

Since January 1, 2008, Sensburg has been Professor of General Administrative Law, Constitutional and European Law and Local Law at the University of Applied Sciences for Public Administration in North Rhine-Westphalia in Münster . From 2009 to 2012 he was also a visiting professor for European law at the Riga International School of Economics and Business Administration (RISEBA).

Since October 2011, foreign text transfers have been documented in Sensburg's dissertation on the Internet platform VroniPlag Wiki . On December 22, 2011, the Fernuniversität Hagen announced that it would not “open any formal proceedings to withdraw the doctoral degree against Dr. Patrick Sensburg open “. The doctoral committee of the Law Faculty of the Fernuniversität Hagen came to the assessment in December 2011 "on the basis of three expert opinions" that the allegations "independently of one another came to the conclusion that the allegations of VroniPlag were untenable" (). 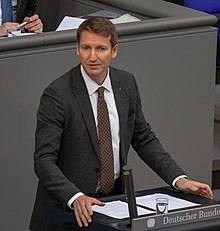 Patrick Sensburg in the plenary session of the German Bundestag (2019)

Patrick Sensburg was in 17 . and 18 . Election period of the German Bundestag Member of the Legal Committee , Chairman of the Subcommittee on European Law and deputy member of the Interior Committee . He was a member of the federal assemblies in 2010 , 2012 and 2017 .

In the 2013 federal election , Sensburg again won the direct mandate in the Hochsauerland district , improving the result of the previous election by 4.4% to 56.1%. Sensburg also won the Hochsauerlandkreis in the 2017 federal election with 48.0%. Compared to the area code, this meant a decrease of 8.1% of the first votes, but at the same time the CDU's tenth highest direct vote result.

After the resignation of the chairman of the NSA committee of inquiry, Clemens Binninger , Sensburg was elected chairman of the committee of inquiry on April 10, 2014. After the NSA investigative committee of the Bundestag had unanimously decided to question Snowden on May 8, Sensburg, as chairman of the NSA investigative committee, accused whistleblower Edward Snowden of merely playing himself and questioning his credibility . Snowden was "never specifically concerned with the mass spying of German citizens in Germany" and "if Snowden does not soon present evidence in the form of original documents, he loses any credibility for the investigative committee." Beyond what can be found on the Internet "Snowden delivered nothing to this day"; Sensburg doubted that Snowden could reveal any significant new details. When a collaboration between the Federal Intelligence Service and the NSA was announced, reports circulated in the press that 200 Americans who were accredited as diplomats were working for the NSA in Germany . Sensburg took up this on June 16, 2014 on ZDF and remarked: "We have eighty million Germans, we will be able to endure two hundred NSA employees." ( Patrick Sensburg :)

On June 28, 2017, Sensburg presented the 1,900-page final report to Norbert Lammert, President of the Bundestag . When it was published on the Internet, an insecure process was used to black out unwanted lines in the corresponding PDF, which disclosed state secrets. The different evaluations of the results of the investigation were revealed in the plenary hearing. Sensburg pointed out, among other things, that the committee had worked “intensely, but also very consensually” for three and a half years. In addition, he referred to the merit of Snowden for having initiated the discussion about the handling of data and the protection of privacy in Germany with his revelations. Regardless of some points of criticism, the committee of inquiry was certified by all parliamentary groups in the Bundestag to be successful. Together with Achim Fuhrer, Sensburg published a book about the NSA committee of inquiry, which did not remain undisputed.

As a rapporteur for the CDU / CSU parliamentary group on data retention , Sensburg presented its own draft law on traffic data security on November 6, 2012. This provides that, in his opinion , data can be collected in the so-called short-freeze process in accordance with the constitution. Sensburg stated that data retention should only be permitted if data security, data use, transparency and legal protection are given. The procedure is intended to create a balance between the citizens' claim to security and the freedom of the individual and is only used if there is a well-founded suspicion of serious criminal offenses.

Sensburg repeatedly campaigned for the surveillance of the AfD by the protection of the Constitution due to extremist statements by AfD politicians. In 2018 he emphasized: "The overall context makes it clear that the AfD is largely anti-constitutional". In the context of the affair about campaign donations from Switzerland to the district association of Alice Weidel , Sensburg warned "Anti-European and anti-German forces are gaining influence in our home country via the AfD." ( Patrick Sensburg :) The plan of the Saxon AfD member of the Bundestag Tino Chrupalla , a black list Sensburg described creating "dubious press representatives" as an attempt to "intimidate unpleasant journalists". After the attack in Hanau , Sensburg suggested that public employees who belong to the AfD should leave the party. "The public service in particular is expected to make a clear commitment to ours and that is what this democracy means".

In August 2014, Sensburg spoke out in favor of a deployment of the Bundeswehr in Iraq against the organization “ Islamic State ”. He rejected the arms deliveries to Iraq, but spoke out in favor of the deployment of German soldiers on the ground: “If you want to pacify, you have to be honest. It would make sense if German soldiers were deployed to distribute the relief supplies and in particular to protect the refugee camps on site ”. In addition, Sensburg referred to Germany's responsibility towards the people in the refugee camps there: "The protection of the population from the atrocities of the IS militias is our humanitarian responsibility and in our very own interest".

In August 2018, Sensburg called for the reintroduction of conscription for reasons of security and defense policy . This should apply to men and women. Those who do not want to join the Bundeswehr could do this compulsory year elsewhere. He had already voted against the suspension of conscription in 2011. Sensburg called the suspension a "fatal mistake". In the course of the terror investigations against Bundeswehr soldiers from 2017 onwards , Sensburg again demanded the reinstatement of conscription. He justified his demand with the fact that the Bundeswehr without conscription does not correspond to the average of the population, the citizen in uniform is “a reliable early warning system for the detection of extremism from left and right”.

Sensburg was rapporteur for the Act to Promote Mediation and Other Out-of-Court Dispute Settlement Procedures, which was passed in 2012. Through the law, Sensburg sees the regulation for the expansion of mediation as a long-term improvement of the culture of dispute in Germany, especially in the area of ​​business mediation for medium-sized companies. Mediation pursues the basic idea that the parties themselves contribute to finding a solution and are not given the settlement decided by the court. In Sensburg's view, only an amicable solution can permanently resolve a dispute.

Association of reservists in the German Federal Armed Forces

On November 9, 2019, Patrick Sensburg was elected President by the delegates of the 20th Federal Delegate Assembly of the Association of Reservists of the German Federal Armed Forces (VdRBw) in Bonn . In March 2020, Sensburg emphasized that the reserve was “with the rifle at hand” when many reservists came forward to help and support as part of the COVID-19 pandemic . More than 15,000 reservists had volunteered by the beginning of April.

President of the Association of Reservists of the German Armed Forces