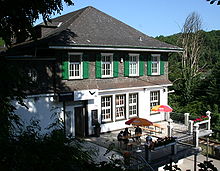 The German cave museum Iserlohn in the district of the city of Green Iserlohn is the largest German Museum for caving . It is housed in a former station on the Letmathe – Fröndenberg railway line .

The museum, which opened in June 2006, tries to show and explain everything on the subject of the " cave " in a modern way on an area of ​​600 m² . In addition to the usual showcases with stones and bones, life-size replicas of a cave lion and a cave bear can be seen. Well-known cave paintings from all over Europe were copied onto a wall. Landscape miniatures, illuminated models, an aquarium with cave fish and a small film room should also meet the requirements of good museum education. The dripping of water on stalagmites can be heard in the darkened “sound room” .

Especially for children there is a play area, a robber's and a crawl cave as well as the possibility to discover mythical creatures on a picture puzzle.

The museum building serves as a portal to the Dechen cave .

The forerunner of the museum was a private museum housed in an inn from 1967 and at the Dechenhöhle from 1979, which was reopened in 1987 as the Dechenhöhle cave museum .