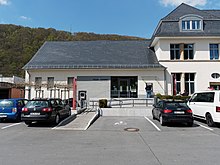 City museum in the extension of the former station building

The Werdohl City Museum is a local museum in Werdohl . It was opened on April 30, 1989 in a building on Goethestrasse. In 2003 the renovation took place with a new conception of the museum. The reopening was in February 2004. In October 2013, the museum was reopened in the premises of the Werdohl train station building before the old building was demolished in 2015.

The facility is supported by the Werdohler Heimat- und Geschichtsverein and the city of Werdohl. The association itself was founded in 1983 and has around 100 members. Its tasks are cultural and homeland maintenance including historical research. The museum maintains cooperation with other associations of this type as well as with the Heimatbund Märkischer Kreis and Westphalian Heimatbund . The museum is also supported by the Sauerland Mountain Association .

In addition to lectures and special exhibitions, the museum also offers excursions. With its focus

it fits in well with the Märkische Technikstrasse . In addition to the Sunday opening times, special appointments can be made for groups and school classes.